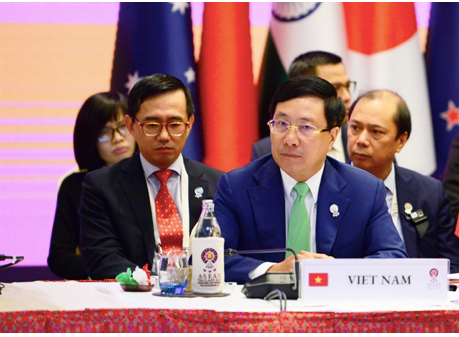 Addressing the 9th EAS Foreign Ministers’ Meeting in Bangkok, Minh shared other ministers’ views on the important role and position of the EAS in the regional architecture, especially given the complex and unforeseeable developments in the region.

The official expressed his backing for efforts to intensify the role of the EAS Chair – Thailand, which also holds the Chairmanship of the Association of Southeast Asian Nations (Asean), Asean+3 and the Asean Regional Forum, and strengthen connectivity and support between these mechanisms.

Regarding the situation in the South China Sea, following the concerns expressed by the EAS countries at the meeting, Minh pointed out unilateral activities that have violated sovereignty and legal interests of littoral countries.

He reiterated that Vietnam has sufficient historical and legal foundations over Hoàng Sa (Paracel) and Trường Sa (Spratly) archipelagos, stressing Asean’s stance and principles on the East Sea.

He called on relevant sides to enhance trust, to not militarise but exercise restraint and take no actions that complicate the situation and intensify tensions, to not use or threaten to use force but seriously observe international law and the 1982 United Nations Convention on the Law of the Sea (1982 Unclos), implement the Declaration on the Conduct of Parties in the East Sea, and build an effective, efficient Code of Conduct in the East Sea in conformity with international law.

They also consented to submit declarations on combating drug trafficking and transnational crime, and on connectivity to the 14th EAS slated for late 2019.

The ministers took note of recent positive developments on the Korean Peninsula, including US-Democratic People’s Republic of Korea (DPRK) summits held in Singapore, Vietnam’s Hà Nội, and Panmunjom in the last two years.

They supported efforts to resume negotiations, step up diplomatic activities and dialogues to seek long-term solutions for the goal of complete, verifiable and irreversible denuclearisation, for sustainable peace on the peninsula.

The EAS countries committed to seriously abide by relevant resolutions of the United Nations Security Council.

Many expressed their grave concerns over the recent developments in the East Sea, including the moves of militarising the area and the activities that threaten legal economic activities of coastal states, erode trust, stir up tensions and negatively affect regional peace and stability.

They reaffirmed the significance of the maintenance of peace, security, stability, safety and freedom of navigation and overflight in the East Sea, non-militarisation, no actions that complicate the situation and unilaterally change the status quo, and handling disputes peacefully in line with international law, especially the 1982 Unclos.

All sovereignty claims must be based on international law, they said, expressing their disapproval of coercive deeds to claim sovereignty in the East Sea. /jpv