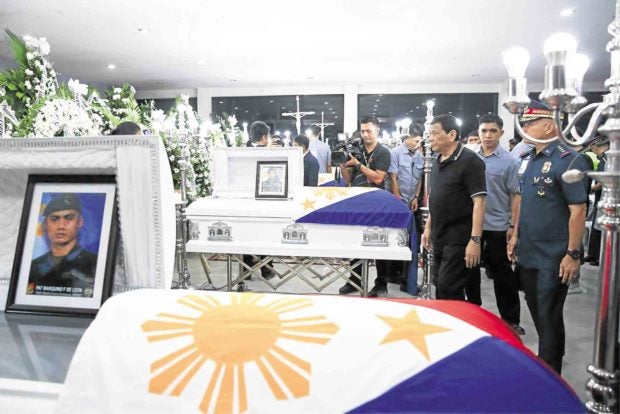 NEGROS KILLINGS  President Duterte, seen here visiting the wake of four police officers slain by communist rebels in Ayungon, Negros Oriental, says he will do “something drastic” to deal with “unabated, unbridled, unstoppable” killings in Negros. He is also offering a P5-million reward for the leader of the rebel band that killed the four officers. —MALACAÑANG PHOTO

They said the unrest in the province originated from the government’s “Oplan Sauron” against communist guerrillas based on the President’s Memorandum Order No. 32 deploying more troops to “suppress lawless violence and acts of terror” on Negros Island, Samar and the Bicol region.

In the last week of July, 14 people were gunned down in separate attacks in Negros Oriental. The victims included a lawyer, a city councilor, a former town mayor, a village chief and a 1-year-old boy.

Presidential spokesperson Salvador Panelo on Thursday said Mr. Duterte may place the province under martial law to stop the killings, which he blamed on the rebels.

The President himself later said he would do “something drastic” that might “not sit well with everybody” to stop the “unabated, unbridled, unstoppable” killings in Negros.

At the Senate, Sen. Risa Hontiveros called for an inquiry into the “killing spree” in Negros, noting that official reports on many of the attacks suggested that “our police and some members of our uniformed [services] are killing innocent people based on questionable information.”

“These murderers seem to fear nothing and no one, completely assured of their impunity, unconcerned by the consequences of the lawless violence that they instigated, and indifferent to the anguish they left that wreaked havoc on the bereaved families of their victims,” she said in the resolution calling for the inquiry.

Kabataan Rep. Sarah Elago said 87 people have been killed in Negros since MO 32 was implemented in December 2018 following the collapse of the peace talks between the government and the communist rebels.

“President Duterte has turned Negros into a killing field. With no one held accountable, the culture of impunity continues to intensify,” she said in a statement.

Castro said the killings erupted when the Duterte administration declared a state of emergency in Samar, Negros and Bicol and increased the number of government forces in those areas.

Panelo on Friday lashed out at such statements, especially from former opposition senatorial candidate Neri Colmenares.

He said Colmenares’ allegations that the police were responsible for the spate of killings in Negros were “baseless and laced with malice.” He added that the Bayan Muna leader’s statement was “part of the propaganda of the Communist Party of the Philippines, to which obviously he subscribes and parrots.”

Colmenares had said the “brazenness” with which the killings were carried out showed those responsible were not afraid of being caught by the police, indicating that the attacks were state-sponsored.

Panelo shot back, saying Colmenares had not condemned any of the “atrocious and illegal acts” of the rebels, which demonstrated not only his “double standards” but also showed “where his loyalty belongs.”

In San Carlos, Negros Occidental, Bishop Gerardo Alminaza on Friday reiterated his call for the resumption of peace talks between the Duterte administration and the communist rebels.

“We remind both sides of the armed conflict that genuine peace can never be achieved through military adventurism and tit-for-tat conflict,” Alminaza said.

The bishop warned that human rights and the rule of law were in danger of being disregarded should Mr. Duterte impose martial law.

“Even now, without any formal declaration of martial law, government commandos and armed partisans are sowing fear and disregarding due process and the rule of law. Even now, human and civil rights are being trampled upon, leaving more and more widows and orphans in our midst,” the prelate said.

Alminaza also urged the rebels and the government to declare a ceasefire while efforts to improve the lives of the poor through land reform were being put in place.

“As the Negros church bells continue to ring every [night], we call on the government and the National Democratic Front of the Philippines to listen to the collective cry of the people: End violence, stop the killings and talk peace now,” he said. —WITH REPORTS FROM MARLON RAMOS, JULIE M. AURELIO AND JOVIC YEE

State health insurer a flatliner by 2022 if not subsidized, official warns