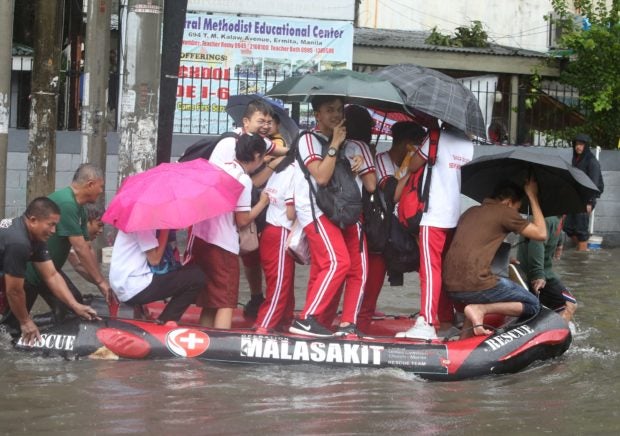 BALANCING ACT  Students dismissed early from school balance themselves on an inflatable raft provided by a rescue team amid knee-deep flood along Kalaw Avenue in Manila. Heavy rains brought by the southwest monsoon on Friday morning forced class and work suspensions in Metro Manila and nearby areas. —MARIANNE BERMUDEZ

A potential low-pressure area (LPA) could develop into a tropical depression over the weekend and will likely cause sustained rains in Metro Manila, Bataan and Zambales, according to the Philippine Atmospheric, Geophysical and Astronomical Services Administration (Pagasa).

Pagasa weather specialist Raymond Ordinario said the western section of Luzon, including Metro Manila, will continue to experience rainfall, as the LPA is pulling in the southwest monsoon, locally known as “habagat.”

Ordinario added that the LPA could develop into a tropical depression either on Sunday or Monday.

Should it enter the Philippine area of responsibility, the new weather disturbance will be given the local name “Hanna.”

However, Ordinario also said that if the LPA would not develop into a tropical depression, the weather would likely be clearer on Sunday.

As of 5 p.m. on Friday, the weather monitoring bureau issued a yellow rainfall warning over Metro Manila, Zambales, Bataan, Cavite and Batangas.

A yellow rainfall warning means flooding is possible in low-lying areas and near river canals.

The weather bureau also advised those in Zambales, Bataan and Benguet to be alert for possible landslides, due to sustained rains.

As of 4 p.m., Cebu Pacific and Skyjet flights to and from Cagayan de Oro, Tuguegarao, Legazpi, Butuan, Roxas, Tacloban and San Vicente, Palawan, were canceled at Naia Terminals 3 and 4, according to the Manila International Airport Authority.

Diverted to Clark were a Southern China Airlines flight from Guangzhou, China, and Cebu Pacific flights from Pagadian, Cebu and Caticlan.

Naia ramp operations were suspended twice on Friday due to the issuance of two light red alerts—one at 6:25 a.m., and the other at 11:50 a.m., lasting 20 and 16 minutes, respectively.

Metro Manila was forced to a standstill on Friday as heavy rains pounded the streets and forced the suspension of classes across the entire region.

Manila, which has been subjected to massive clearing operations to decongest the roads, was the most affected, as several streets sunk under knee-high flood, according to the Metropolitan Manila Development Authority (MMDA).

By 7 a.m., or after three hours of nonstop rainfall, Lawton, España, Otis, Taft, Roxas Boulevard and Ramon Magsaysay in Manila were under at least a foot of flood, according to Celine Pialago, the MMDA spokesperson.

Stranded pedestrians were ferried aboard rubber boats deployed by the MMDA and the city’s disaster responders.

Despite this, Manila Mayor Francisco “Isko Moreno” Domagoso only suspended classes at around 8:40 a.m., saying that the weather bureau only raised the yellow rainfall warning over Metro Manila at 8:26 a.m.

In other areas like Edsa and Quezon Boulevard, commuters were forced to scramble for seats in buses and jeepneys amid light rain.

Winding, snaking lines also plagued the Light Rail Transit 1 in Manila and the Metro Rail Transit 3 in Quezon City as people scrambled to go home after the suspension of classes and most government offices.

Malacañang on Friday eventually suspended work in government offices as well as classes in all levels in public and private schools in Metro Manila due to the bad weather.

But the suspension did not take effect until 3 p.m. amid heavy downpour that drenched Metro Manila the whole day.