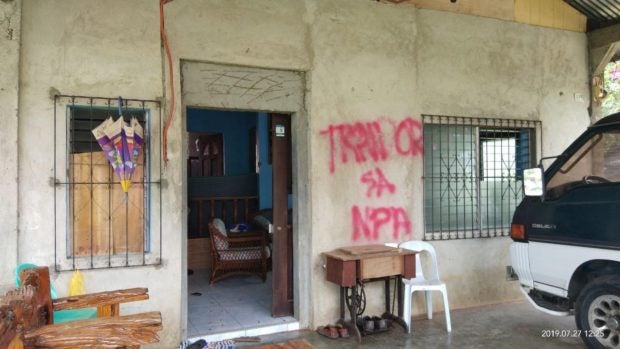 KILLERS LEAVE MARK Gunmen who killed early on Saturday, July 28, 2019, Ernesto Posadas, Panubigan village chief, in Canlaon City, Negros Oriental, spray-painted allegations that he was a “traitor to the NPA.” The Communist Party of the Philippines
denied any involvement in the series of killings in the province. INQUIRER

MANILA, Philippines — The series of killings in Negros Oriental is “purely police matters that are within the jurisdiction” of the Philippine National Police (PNP), spokesman Brig. Gen. Bernard Banac told the Commission on Human Rights (CHR) on Friday.

Banac said that although the PNP recognizes the mandate of CHR to look into cases that fall within its area of interest, it has “reservations that overlapping jurisdictions may muddle [its] own investigation and unduly result in the miscarriage of justice.”

“The series of crime incidents that happened in Negros Oriental recently is purely police matters that are within the jurisdiction and mandate of the PNP to take action,” he said in a statement.

Nevertheless, Banac said the PNP “respects” the ongoing investigation by the CHR – which had asked cooperation from the police – being conducted simultaneously with that of the PNP’s Directorate for Investigation and Detective Management.

According to Banac, the police are also willing to provide security assistance to CHR personnel should they need it as they investigate the killings.

In a statement also on Friday, CHR questioned talks on the possibility of declaring martial law in Negros Oriental. For CHR, there is no need for military rule in the province especially since the PNP leadership has assured that the peace and order situation there is under control.

READ: CHR: If PNP says Negros Oriental is under control, why the need for martial law?

Banac said, however, that although the police are on top of the situation in Negros Oriental, “we can never foretell what may happen next.”

“So if the President deems it necessary, he may use emergency powers as provided for by law,” he noted.

READ: PNP: Duterte can use ‘any of his powers’ to address Negros killings