MANILA, Philippines — A bill that seeks to give a minimum monthly compensation and additional insurance benefits for media workers has been filed in the House of Representatives.

Anti-Crime and Terrorism Community Involvement and Support (ACT-CIS) Rep. Rowena Niña Taduran filed House Bill No. 2476 or a proposed law “providing enhanced protection, security, and benefits for media workers.” It was referred to the House committee on labor and employment last July 30.

“Media workers, despite being part of the labor force, are, more often than not, left to fend for themselves especially when making danger-filled reportages… the least that we can do to show that we recognize (their contribution)… is to give them their economic due and added protection under the law,” Taduran said in her explanatory note of the bill.

Section 6 of the bill spells out the minimum monthly compensation that should be given to various media practitioners in the National Capital Region depending on their years of experience: 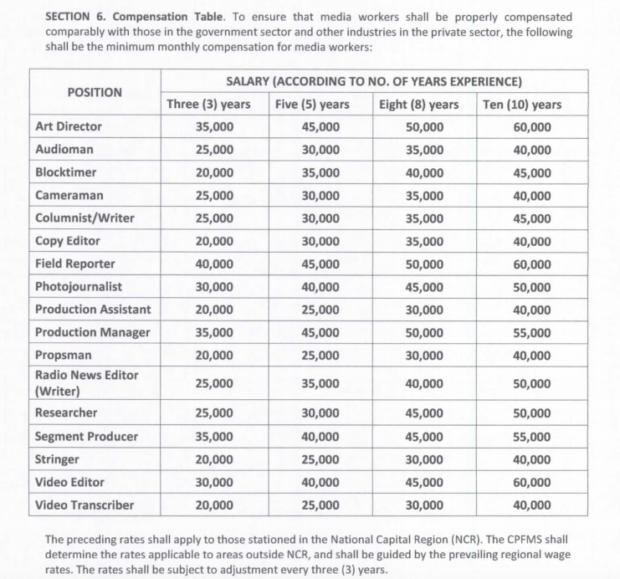 Aside from the insurance benefit given by the government, employers would also be required to give the following minimum benefits to their workers once the bill is enacted into law:

Section 7 of the bill also states that “stability of employment and security of tenure shall be assured the media workers as provided under existing laws.”

HB 2476 also creates the Commission on Press Freedom and Media Security (CPFMS) under the Presidential Communications Operations Office (PCOO) that would be responsible for creating a database of all media workers, conducting training and seminars, and crafting and lobbying for media laws.

The body headed by PCOO would also be composed of 10 journalism organizations like the National Press Club, Kapisanan ng mga Brodkaster ng Pilipinas, National Union of Journalists of the Philippines, and Center for Media Freedom and Responsibility.