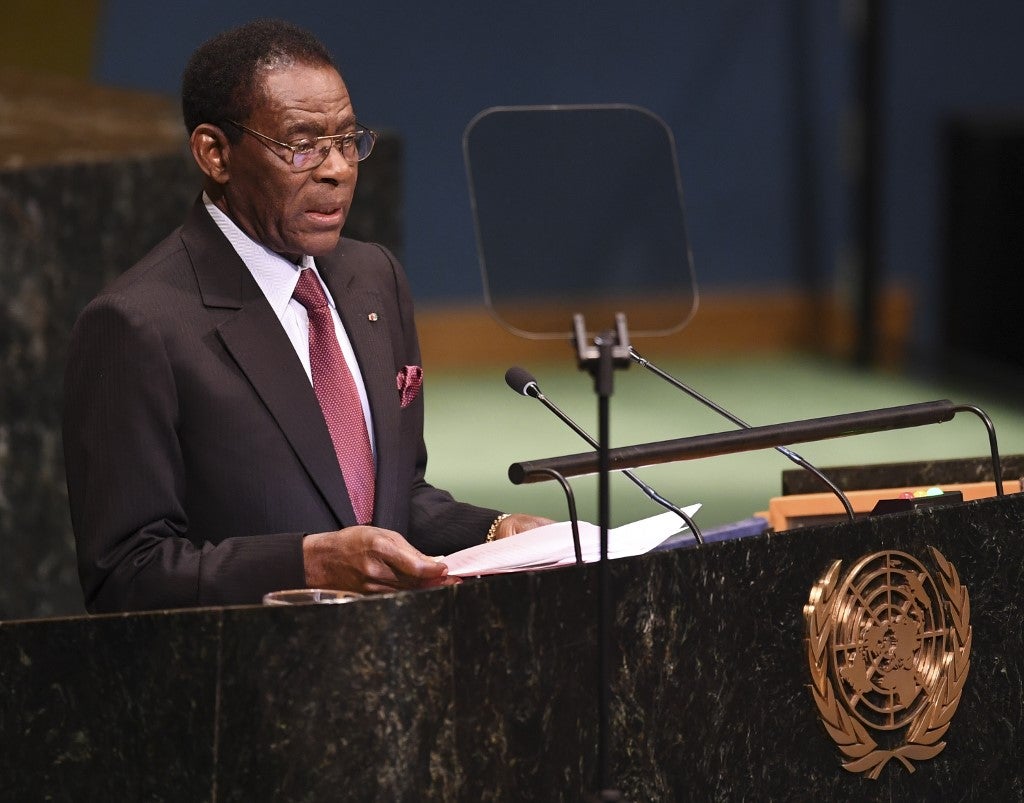 In this file photo taken on September 24, 2018 Equatorial Guinea’s President Teodoro Obiang Nguema Mbasogo addresses the Nelson Mandela Peace Summit, one a day before the start of the General Debate of the 73rd session of the General Assembly at the United Nations in New York. (Photo by Don EMMERT / AFP)

PARIS, France — Teodoro Obiang Nguema, president of Equatorial Guinea for 40 years on Saturday, is the world’s longest-serving living leader apart from Britain’s Queen Elizabeth II, on the throne for 67 years.

Africa’s longest-serving ruler was also a monarch: Ethiopian emperor Haile Selassie reigned for 44 years before being removed in 1974 in a military coup.

Apart from monarchs, who are usually installed for life, here are the leaders who have ruled for the longest.

Leading the pack is Cuba’s revolutionary hero Fidel Castro, with 49 years in power. When he handed over in 2008, ill and aged in his early 80s, it was to his brother Raul.

Taiwan’s first president Chiang Kai-shek was in charge on the island and in mainland China for a total of 47 years until his death in 1975.

North Korea’s founder Kim Il Sung ran the reclusive state for 46 years before dying in office in 1994, remaining revered as the “eternal leader”.

Moamer Kadhafi ruled Libya with an iron fist for almost 42 years before being ousted and then slaughtered in 2011 by rebels at the height of the Arab Spring uprisings.

Omar Bongo Ondimba governed oil-rich Gabon for more than 41 years until his death from cancer in 2009.

Albania’s communist dictator Enver Hoxha was in power for 40 years until his death in 1985.

More than 30 years in charge

Still adding up their time at the top are:

– Congo-Brazzaville’s Denis Sassou Nguesso at 35 years, excluding a five-year pause after he lost a 1992 election;

– Iran’s Ayatollah Ali Khamenei has been supreme leader since the death of Ayatollah Ruhollah Khomeini in 1989.

Following close behind are these presidents: