Japan sizzles as heatwave claims 11 victims in one week 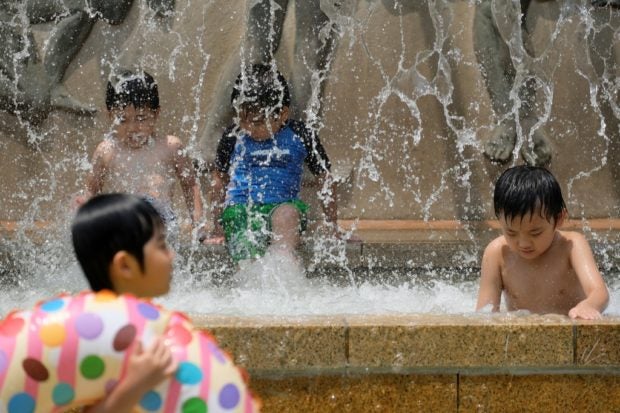 TOKYO — Japan is now sweltering amid a deadly heatwave, after a historic lengthy rainy spell earlier this month, raising fresh concerns over Tokyo’s preparedness to protect athletes and spectators from the heat at the Olympic Games this time next year.

The government said yesterday that 11 people died and 5,664 people were taken to hospital with heat exhaustion symptoms in the week ending on Sunday.

One of those who died was a 28-year-old performer at an Osaka amusement park who collapsed after a full-dress rehearsal on Sunday night. The operator of the entertainment venue in Hirakata city said that it will cancel all costume shows in the summer.

Of those taken to hospital last week, one in two was a senior citizen, while one in three was between the ages of 18 and 65. The number of victims nearly tripled from the 1,948 in the previous week.

The Japan Meteorological Agency (JMA) on Monday officially announced the end of the tsuyu rainy season in the Kanto region, which includes Tokyo and the neighbouring prefectures of Kanagawa, Saitama and Chiba. This was 30 days later than last year, and eight days later than in an average year.

This came after central Tokyo experienced its cloudiest July in decades, with three hours or less of sunlight for 20 straight days, ending on July 16, in what was the longest streak since 1961.

The JMA has urged people to stay hydrated by drinking water frequently, block direct sunlight using curtains and use parasols or wear hats when outdoors. It has also called on the public to set cooler air-conditioning temperatures or ensure good air ventilation, with as many as 35 per cent of victims last week succumbing to heat exhaustion at home.

Weather forecasts this week show daytime highs of 35 deg C and above in widespread areas, including the cities of Kyoto, Osaka, Nagoya, Hiroshima and Fukuoka. Tokyo, meanwhile, is expected to experience daytime highs of 34 deg C.

The Tokyo Metropolitan Government and the 2020 Games Committee have pledged to spare no effort to mitigate heat-related issues at next year’s Olympics, which will run from July 24 to Aug 9.

Among the steps being taken are to bring forward the flag-off time of marathon races, install a special coating over 136km of streets that can reduce surface temperatures by up to 8 deg C and install mist sprayers at event venues.

Health Ministry data showed that 1,518 people died of heatstroke across the country between June and September last year. More than 55,000 were treated for dehydration and other heat-related symptoms between July and August.

And just this May, unseasonal heat in northernmost Hokkaido caused the town of Saroma to sizzle at an unprecedented prefectural high of 39.5 deg C.

Japan’s Environment Ministry has warned that such extreme heat conditions will be the norm rather than the exception if countermeasures are not taken against global warming.