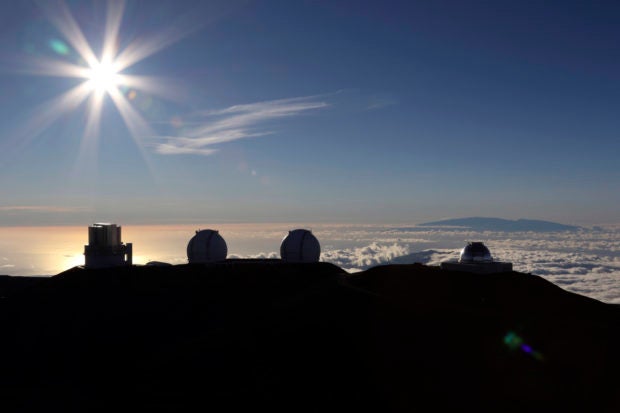 FILE – In this Sunday, July 14, 2019, file photo, the sun sets behind telescopes at the summit of Mauna Kea in Hawaii. The man tasked with trying to find a way out of an impasse over the construction of a giant telescope in Hawaii says he met with Native Hawaiian leaders. But the only issue they reached a consensus on was to meet again. (AP Photo/Caleb Jones, File)

The native Hawaiian Hollywood actor wore green leaf lei around his neck and the crown of his head as he attended a ceremony at the protest site on Wednesday.

He said he was honored to be there, drawing cheers after saying, “We are not going anywhere.”

Protesters have blocked the road to the summit for 17 days.

They oppose the telescope because some native Hawaiians believe Mauna Kea’s summit is sacred.

The summit also has the best conditions for astronomy in the Northern Hemisphere. /gsg