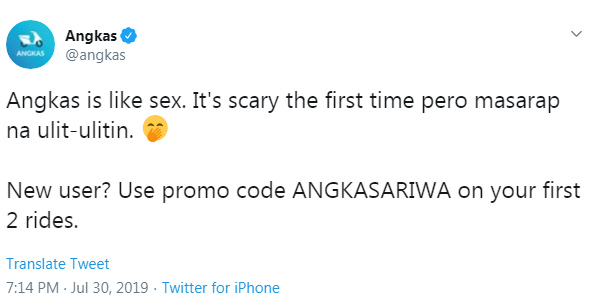 The marketing stunt ignited a social media firestorm and prompted even the Philippine National Police to call out Angkas, saying the tweet is “not promoting public safety in transport business anymore.”

Angkas apologized that the tweet, which it described as a “misstep”, made its riders “uncomfortable” and “feel unsafe”, adding that it takes full responsibility for the deed.

“We would like to emphasize that making our riders feel uncomfortable is the last thing we want to do,” Angkas chief executive officer Angeline Tham said in a statement.

“Safety has always been our brand’s priority, and we apologize for how our recent tweet has made users feel unsafe and cast doubt on the integrity of our service,” she added.

The firm also apologized to its bikers as the tweet “cast them in an unfair light.”

It maintained that its bikers are “qualified professionals” who are “trained to respect their riders and make them as comfortable as possible.”

While Angkas believes that sex should be discussed maturely and openly, it admitted that its treatment of the matter was “far from desirable.

“Sex should never be used to create shame, fear, or disgust, and certainly not used lightly for the sake of some buzz,” Angkas said.

Angkas, literally pillion rider, ingeniously makes use of motorbikes to get its passengers through Metro Manila’s notorious traffic gridlocks, giving it an edge over its car-based ride-sharing app rivals.

While the post was later deleted, it did not escape the attention of the police, who posted a screenshot of it on Twitter with a call for regulators of the transportation industry to take action.

“This is not acceptable to commuters. Angkas will scare people off with this. This is not promoting public safety in transport business anymore,” the PNP said.

However, other social media users also hit out at the police for its alleged double standard.

“Can we call your attention to this person too? This person is not promoting public safety and decency anymore,” Twitter user Petey Pablo posted.

“Call out your president first before other people,” said another Twitter user called Drew Arellano.

Duterte aides have previously defended the Duterte’s crude comments, saying they were only intended to make people laugh. With Agence France-Presse