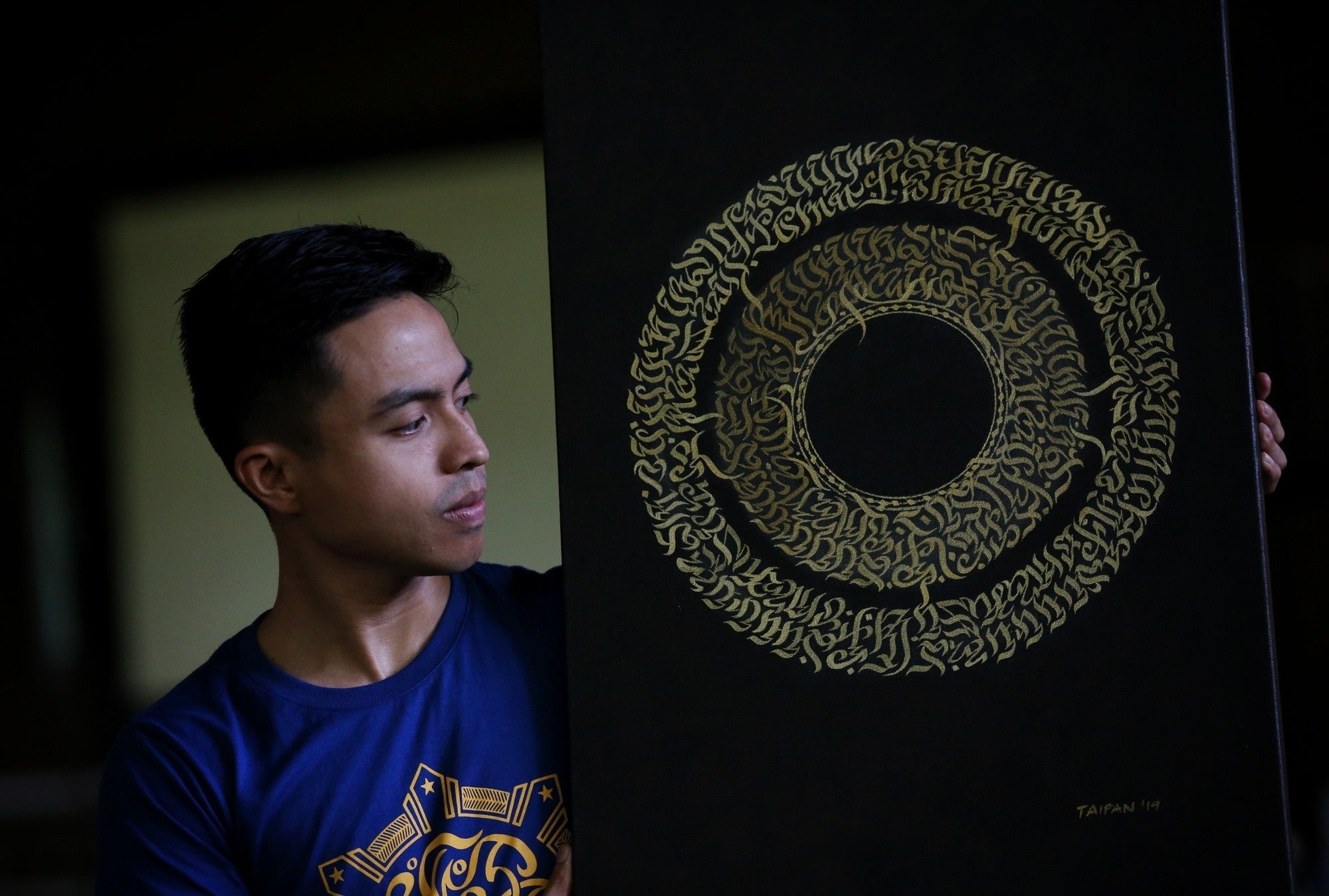 FOR THE SMARTPHONE GENERATION Taipan Lucero shows an artwork featuring “Baybayin” characters during a conference on indigenous languages held in Manila in May. The ornate script, repeated to form the shape of a gong, reads “Kabataan ang pagasa ng bayan” (The youth are the hope of the nation). —LYN RILLON

MANILA, Philippines — With deliberate golden strokes, artist Taipan Lucero proudly brings an ancient script back to life, in the hope of promoting an endangered but contentious part of Philippine heritage.

Once confined to history classes, Baybayin, a 17-character indigenous script used before Spanish colonization, is making a comeback among the nation’s millennials, young professionals and diaspora.

Even as technology renders writing by hand outdated, online clips of calligraphy and digital fonts for the script have gripped the smartphone generation and now Baybayin, last used hundreds of years ago, is appearing on everything, from tattoos and T-shirts to mobile apps.

Proponents hail the curvilinear text as a crucial part of Philippine identity, but in a country with 131 government-recognized languages, critics say investing in the promotion of one ancient text over others is controversial and impractical.

“It’s bittersweet. It made me proud knowing our ancestors were literate,” said Lucero, who studied calligraphy in Japan but returned home to apply his skills to reviving Baybayin.

“What’s sad about this is what’s being propagated in our education system. It’s like our history started with being colonized by Spain,” the 31-year-old added.

Baybayin was the form of writing used before the Spanish arrived in 1521, and missionaries had to learn it initially to spread Catholicism before forcing locals to adopt their Roman alphabet, historians say.

Its resurgence has prompted calls from some for a law declaring Baybayin the national script. But regional scholars say the text is important mainly to Tagalogs, the people historically based in and around the capital, rather than to all Filipinos.

Advocates say reviving Baybayin will provide an antidote for a nation grappling with its colonial past and is a way of celebrating indigenous history.

Many are proficient in English because of the American occupation. Spain ceded control to the United States in 1898 and the Philippines only became independent in 1946.

“It’s a great achievement to invent our own writing system,” Leo Emmanuel Castro, executive director of cultural group Sanghabi, told Agence France-Presse (AFP). “Our language is gender-neutral. Professions and pronouns have no sex whereas English is very sexist.”

The campaign to bring Baybayin to the mainstream advanced in January, when the House of Representatives passed a bill mandating its use in signs and educational materials. The bill is stalled in the Senate, but the proposal has been refiled in the new session that started in July.

Holiday hot spot Boracay Island has already ordered the use of Baybayin in signage, in a bid to counter the proliferation of Chinese characters for tourists.

Regional cultural advocates, however, say such efforts threaten all of the nation’s indigenous scripts.

Their anger is rooted in a 1937 proclamation that Tagalog be the basis of the national spoken language now called Filipino, and they see the revival of the Baybayin text as another blow for the nation’s linguistic diversity.

“The Philippines has become a country only for the Tagalogs,” said Michael Pangilinan, an advocate of the Kulitan script of Pampanga province, who warned local identity would be “completely wiped out” if using Baybayin becomes mandatory.

“The Philippine state makes us ashamed of who we are until the Kapampángan people themselves are the ones repressing their own language and culture to become Filipinos (Tagalog),” Pangilinan said in an email to AFP.

Of the 17 documented Philippine syllabary systems of consonant and vowel syllables, only four remain in use among indigenous communities today, according to Unesco.

“When it comes to a national discussion, you need to use the dominant language known by the majority,” countered Jay Enage, chair of Baybayin Buhayin, a group lobbying for the bill.

But the practicalities of bringing a historic script into modern use, teaching it in schools, and honing it to fit places of work and 21st century life, may be the biggest challenge.

“It will just be a novelty, for display,” said Joselito Delos Reyes, professor of creative writing and popular culture at Manila’s University of Santo Tomas.

“It won’t be a platform for communication,” he added, saying lawmakers should instead prioritize improving education infrastructure and teachers’ salaries.

Virgilio Almario, chair of the government commission on Filipino language, said it was important to walk the line between losing scripts to extinction and being practical about usage.

“We need to balance this carefully. We need Filipino as a bridge language but we should also appreciate the languages of all communities,” he said.

More than division, advocates say Filipinos should see opportunity in belonging to a multilingual country.

“The heart and soul of a country is its culture. The problem is that we don’t value it due to our colonial mentality,” Filipino-American Baybayin artist Kristian Kabuay told AFP.

Asked if the current Baybayin resurgence is just a fad, calligrapher Lucero insisted it was vital Filipinos take the time to understand the script’s importance.

He added: “It’s part of our culture and our identity, and if we forget about it, we throw away part of ourselves.”