With no sturdy shelters, quake survivors opt to remain in tents 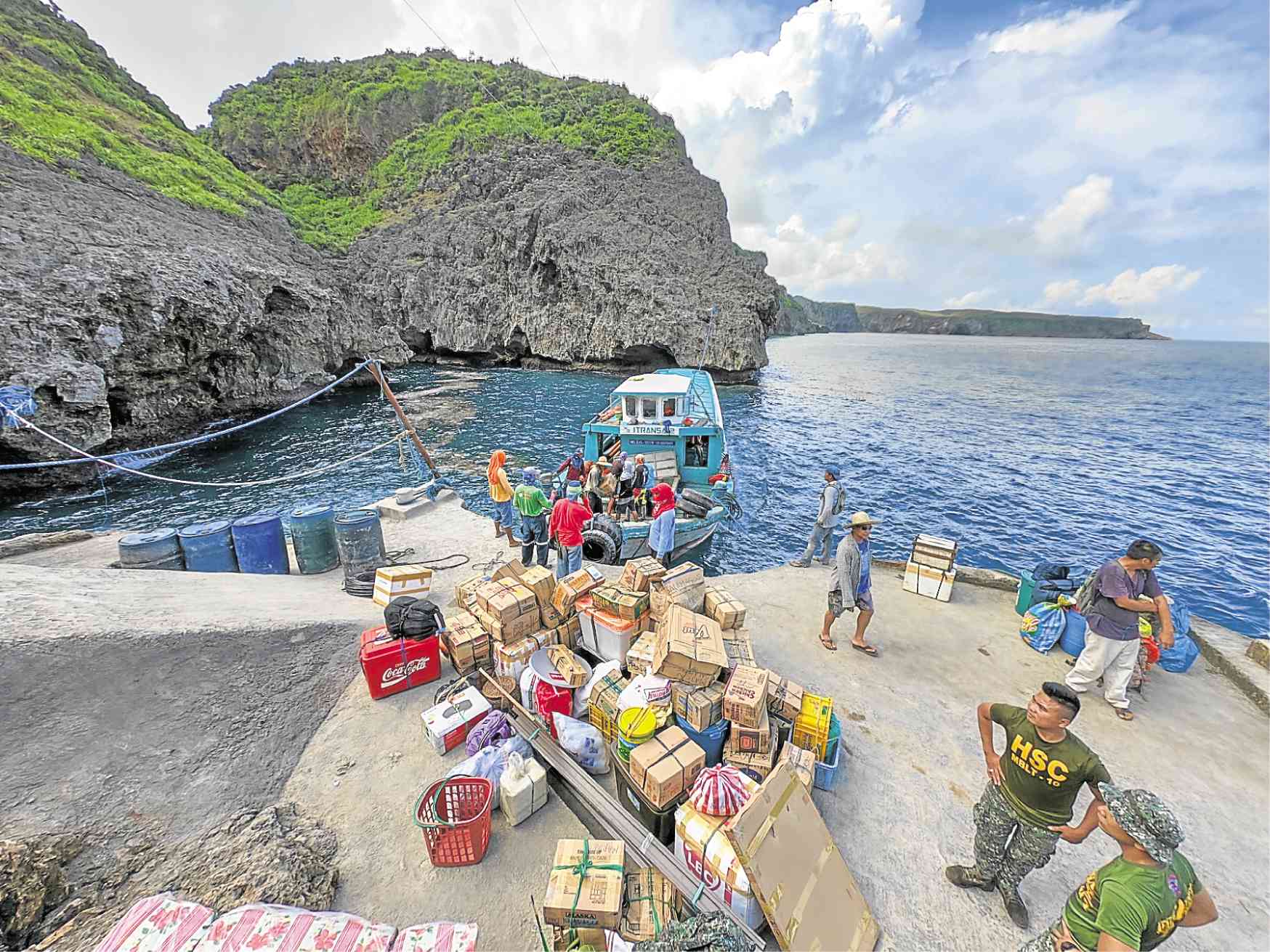 HELPING BATANES Donations of food and other supplies are unloaded at a port in earthquake-hit Itbayat town in Batanes province. —ARNEL COMAYA/CONTRIBUTOR

ITBAYAT, Batanes, Philippines — Barely a week after strong earthquakes jolted this northernmost town in the country, nearly all of its 2,693 residents are staying in makeshift shelters near the public market and have yet to return to their homes.

Local disaster officials said the 911 families (2,616 people) in this town had opted to stay in unstable tents at the town plaza, fearful that more earthquakes could cause further ruin to their houses.

At least 266 houses in five villages were damaged or destroyed by the quakes that occurred at dawn of July 2, records from the National Disaster Risk Reduction and Management Council (NDRRMC) showed.

Disaster response and local officials have cautioned villagers against going back to their houses until the arrival of construction materials that would be used to build safer temporary shelters.

Agnes Nico, a teacher, said the residents were hoping that the materials would reach them before a storm hits the province.

The Office of the Civil Defense (OCD) said bringing the construction materials to Itbayat might take days, depending on trip schedules of vessels that would deliver these from Metro Manila or ports on mainland Luzon.

Ronald Villa, who oversees OCD operations in Cagayan Valley, said his office was waiting for word from the NDRRMC on the status of delivery.

Batanes Gov. Marilou Cayco earlier said the provincial government had tapped into its emergency funds to buy relief supplies and construction materials for the shelter program.

As many as 299 aftershocks had been recorded since Itbayat was jolted by a 5.4-magnitude quake at 4:16 a.m. on July 27 and a 5.9-magnitude tremor more than three hours later, according to Paulo Sawi, science research analyst of the Philippine Institute of Volcanology and Seismology (Phivolcs).

Sawi said 21 of these aftershocks were felt, while at least 35 were plotted by instruments. These ranged from 2.2 magnitude to 5.9 magnitude and were felt at Intensity 3 to 4, according to the NDRRMC.

Nine people were killed while 60 others were injured, it said. Most of the fatalities were sleeping when their houses collapsed following intense ground shaking. 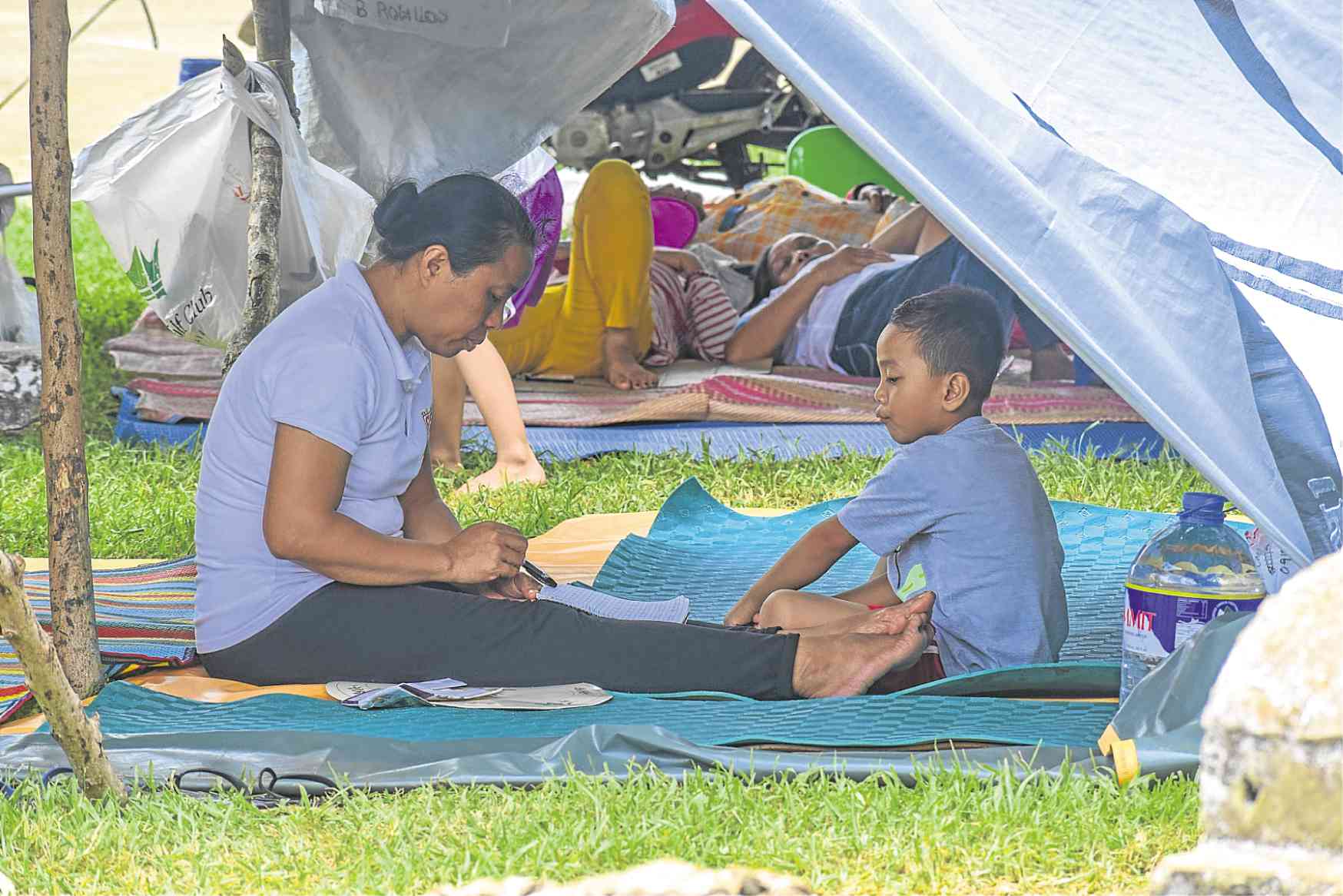 SHELTER Most residents displaced by strong earthquakes in Itbayat are staying in tents at the town center as they await clearance from local officials to transfer to temporary shelters that they promised to build. —ARNEL COMAYA/CONTRIBUTOR

The Department of Public Works and Highways (DPWH) on Wednesday estimated damage to infrastructure in Batanes at close to P300 million.

The DPWH said 978 residential, public buildings, roads and slope protection structures in five villages were either damaged or destroyed.

Barangay San Rafael was the worst-hit, with 269 structures damaged or destroyed. Damage cost was placed at P103 million.

Government seismologists on Wednesday visited the quake survivors staying in tents to explain the source of the powerful earthquakes.

Itbayat received an emergency Wi-Fi access point from the Department of Information and Communications Technology to ensure the government’s interagency disaster response.—With reports from Juliet Cataluña and Jovic Yee

The Philippine Daily Inquirer is helping extend relief to the families affected by the recent earthquakes in Batanes. Cash donations may be deposited to the Inquirer Foundation Corp.’s Banco De Oro (BDO) current account No. 007960018860. Inquiries may be addressed and emailed to Inquirer’s Corporate Affairs office through [email protected], or call 8978808 local 238 or 352.