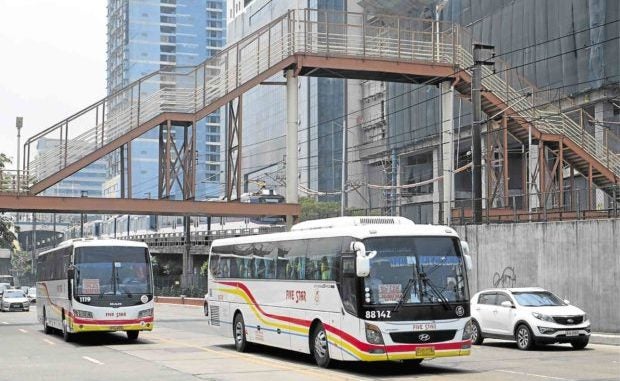 MANILA, Philippines — Public transport operators have committed to participate in the dry run of the provincial bus ban along Edsa, which will start on Aug. 7, the Metropolitan Manila Development Authority (MMDA) said Wednesday.

MMDA General Manager Jojo Garcia made the assurance following a meeting with bus operators and officials of the Land Transportation Franchising and Regulatory Board (LTFRB).

“I’m so happy to say that all of them will participate. That means they are joining even without full enforcement. They understand that we have to see if there will be any loopholes [in the implementation],” Garcia, speaking partly in Filipino, told reporters in an interview after the meeting.

Garcia said the MMDA would push through with the ban without imposing penalties against erring operators and drivers.

He added that the bus ban would have window hours from 10 p.m. to 4 a.m., during which provincial buses would be allowed to ply Edsa but would only load and unload passengers on common terminals, such as Araneta Bus Terminal in Cubao, Quezon City.

“We would want to see in this dry run what loopholes we will have in its implementation,” Garcia said. “There will be no penalties. So we pleaded with operators to commit that they will follow the scheme 100 percent.”