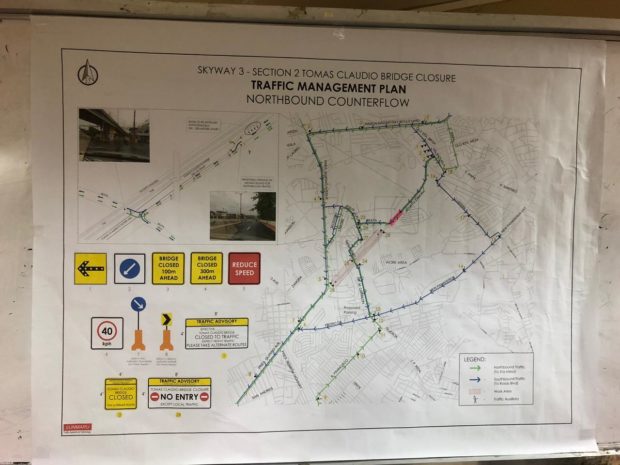 This photo shows the MMDA traffic management plan that was presented during a press conference in Makati City on Wednesday, July 31, 2019, as the public is notified of the six-month closure of a portion of the Tomas Claudio Bridge in Pandacan, Manila, starting August 3, 2019. INQUIRER.net/Daphne Galvez

MANILA, Philippines — A section of the Tomas Claudio Bridge in Pandacan, Manila will be closed to vehicular traffic for six months starting this Saturday, August 3, to make way for the construction of Skyway Stage 3 Elevated Expressway project, the Metropolitan Manila Development Authority (MMDA) announced Wednesday.

Officials also said that a portion of the bridge – from Valenzuela Street to Beata Street – will stay passable but only for light vehicles.

MMDA General Manager Jojo Garcia said the bridge’s closure will begin at 10 p.m. He also said the construction of Skyway is expected to help ease traffic flow on Edsa and C-5 Road.

Around 12,000 vehicles are likely to be affected by the bridge’s closure, according to Garcia. He also said that he ordered traffic enforcers to conduct clearing operations on identified alternate routes in order to lessen traffic build-up.

The Skyway project is anticipated to be finished by the first quarter of 2020, according to Transport Road Sector consultant Alberto Suansing.

At this point, authorities advised trucks and trailers going in and out of Beata Street to just take Jesus Street then Quirino Avenue Extension towards their destination.

Read Next
At least 1,600 families flee as Army pursues BIFF in Cotabato, Maguindanao
EDITORS' PICK
A gem of a residence in the new normal
Water remains our saving grace right now
Health workers from other regions eyed as ‘substitute’ for NCR frontliners
Smart 5G goes live
PNP: Checkpoints back in MECQ areas
MECQ guidelines in infographics
MOST READ
MECQ guidelines in infographics
MECQ in NCR, other areas: Mass transportation suspended, quarantine pass required anew
Doctors group to Duterte: ‘There was never a call for a revolt’
Want higher pay? Join the police force, Duterte tells nurses
Don't miss out on the latest news and information.