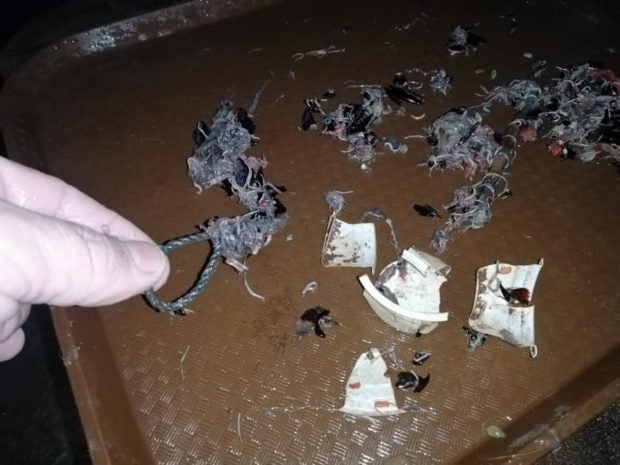 Pieces of rope and a broken-up plastic cup were found in the intestines of a dead pygmy sperm whale that was washed ashore in Barangay Matina Aplaya in Davao City on Sunday morning. D’Bone Collector Museum owner Darrell Blatchley, who performed the necropsy, said this is the fifth dead cetacean that their team found in Philippine shores this year. Most of them died due to ingesting marine plastic. PHOTO COURTESY OF DARRELL BLATCHLEY

MANILA, Philippines — Plastic and marine litter were once again found as the culprits behind the death of another whale found beached in a coastal village in Davao City over the weekend, underscoring anew the detrimental impact of plastics on marine life.

Weighing around 200 kilograms, it was the fifth dead cetacean recovered by the team from D’Bone Collector Museum, a natural history museum in Davao City, for this year alone.

The whale was emaciated and dehydrated, and could have been dead for at least two days, said Darrell Blatchley, the museum founder who performed the necropsy.

From its intestines, the team recovered pieces of nylon rope and a broken plastic cup, which Blatchley described as similar to the single-use cups used by street food vendors.

“Its stomach and intestines were empty. [It only had] plastic … that was lodged in the intestines’ entrance that caused the dehydration and starvation,” he said in an interview on Monday.

With squid, fish and crabs as their main diet, Blatchley said it did not take much to kill a pygmy sperm whale, considered rare due to the limited information available about the species.

Its intestines are only finger-wide and about 20 meters long. “So once the plastic blocks it, it creates a sense of being full … That’s when it becomes weaker and [later] dies,” Blatchley said.

Since the museum opened 10 years ago, it has recovered 63 dead whales and dolphins from the Davao Gulf. Nearly 50 of these were killed due to ingestion of plastic and other marine debris, which they mistake for food.

In March, a beached Cuvier’s beaked whale that eventually died in Compostela Valley was discovered to have some 40 kg of plastic trash in its stomach.

The trash included 16 rice sacks, four “banana plantation-style bags” and multiple shopping bags, which Blatchley said were the most plastic garbage ever found in a whale’s guts.

Following the discovery of yet another dead marine mammal, the environmental group Greenpeace reiterated its call to reduce plastic production and for people to be more mindful of their throwaway lifestyle.

Earlier this year, the group had also documented a tiny crab trapped inside a disposable cup in the Verde Island Passage, a 1.14-million hectare strait within the Mindoro-Calavite-Tablas triangle dubbed the “center of the center of marine shore fish biodiversity.”

Their photos also showed sachets of condiments settling on coral beds, conveying the serious extent of plastic pollution in the oceans.