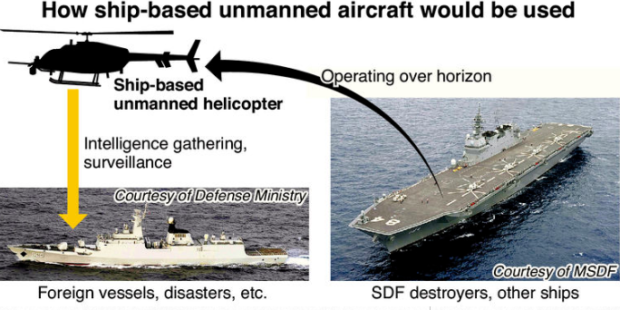 TOKYO — In response to China’s maritime expansion, the government wants to strengthen its early warning and surveillance activities around the Senkaku Islands in Okinawa Prefecture.

The helicopter model is expected to be selected in fiscal 2022, with the procurement starting in fiscal 2023, the sources said.

With Chinese government ships regularly sailing around the Senkaku Islands and the Chinese military becoming more active in places such as the East China Sea and Pacific Ocean, figuring out how to operate with limited personnel and equipment has become an issue.

Ship-based unmanned aircraft can monitor faraway foreign vessels and other objects that cannot be captured by shipboard radar, which would expand the area over which a single MSDF vessel is able to cover in its surveillance.

Unmanned aircraft (see below) can also fly at night and in bad weather, giving them a broader range of operation than manned aircraft.

Learning from the 2011 disaster at the Fukushima No. 1 nuclear power plant of Tokyo Electric Power Company Holdings Inc., the government is considering equipping the drones with radiation sensors.

The Defense Ministry wants drones to take over duties that are risky for manned aircraft.

The unmanned helicopters would likely be deployed to Izumo- and Hyuga-class destroyers, as well as to a new destroyer with minesweeping capabilities.

The MQ-8C Fire Scout is considered the leading candidate. Made by Northrop Grumman Corp. of the United States, the 12.6-meter-long, 2.7-meter-wide unmanned helicopter can detect the movements of ships and other objects from an altitude of about 5,000 meters.

The U.S. Navy’s MQ-8B version is said to be capable of flying continuously for more than eight hours, or of operating for five hours over an area 200 kilometers from its base ship.

In December last year, the Cabinet decided to introduce three unmanned helicopters as part of the five-year Medium Term Defense Program for fiscal 2019 to 2023. The government wants to create a force of 20 such helicopters over the next decade or so.

Under the current legal framework, operating unmanned aircraft must be monitored by direct eyesight from manned aircraft or other locations. So the government will need to study and affect a change to the law to allow unmanned helicopters to operate independently.

This refers to planes and helicopters that can operate without onboard human pilots. They can be operated remotely or autonomously. The Self-Defense Forces are working on introducing three Global Hawks, which are unmanned reconnaissance planes that can monitor military movements from as high as 15,000 meters.