MEXICO CITY – A white gold bracelet adorned with crocodiles and encrusted with 1,331 diamonds glittered from a display case, not far from a yellow gold pendant in the shape of a bullet covered in 450 tiny black diamonds. 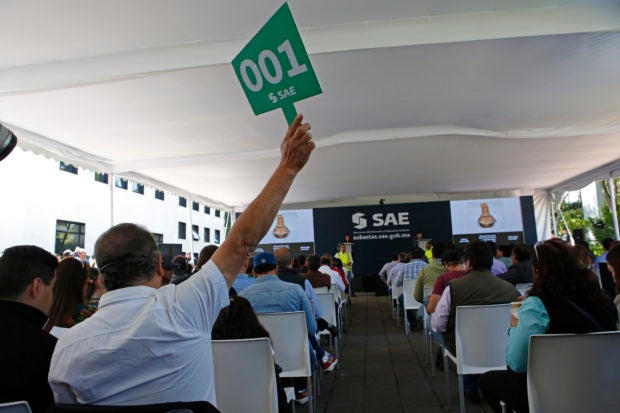 A man raises his paddle during an auction of government seized jewelry at Los Pinos Cultural Center, formerly the presidential residence, in Mexico City, Sunday, July 28, 2019. The auction was held by the Institute to Return the Stolen to the People, the name for a branch of the Finance Ministry charged with selling property seized from purported drug dealers and tax cheats, as well as government goods that are no longer in use. (AP Photo/Ginnette Riquelme)

Those were just two of 2,000 pieces of jewelry seized from criminals and tax cheats that the Mexican government put to auction Sunday.

The sale offered a glimpse into the eccentric tastes of Mexico’s criminal underworld, while reinforcing a perception among the new government’s supporters that it is more transparent and humble.

It was the third such auction of luxury goods organized by the administration of President Andrés Manuel López Obrador, who has sought to set a tone of austerity since taking office Dec. 1.

The auctions have been held outside Los Pinos, a mansion in the capital’s Chapultepec Park that served as the official presidential residence until López Obrador turned the property into a cultural center open to the public.

Ricardo Rodriguez Vargas, head of the Finance Ministry’s recently created Institute to Return the Stolen to the People, said the goal Sunday was to raise 21 million pesos ($1.1 million) for building roads in western Mexico.

Some of the items have been in government storage for as long as five years, gathering dust.

The institute opted to hold off, for now, on the sale of gem-crusted gun handles and pendants of religious figures considered to be the patron saints of drug dealers.

Thousands of Mexicans visited Los Pinos over the past week to gawk at what many assumed to be narco treasures.

“They had some very strange things made,” said Felipe Palma, who passed through with his family Sunday.

The intertwined crocodiles caught Palma’s attention more than any other piece. The two predators appeared to be wrestling, their green emerald eyes glistening with mischief. The bracelet sold for the equivalent of $10,500. 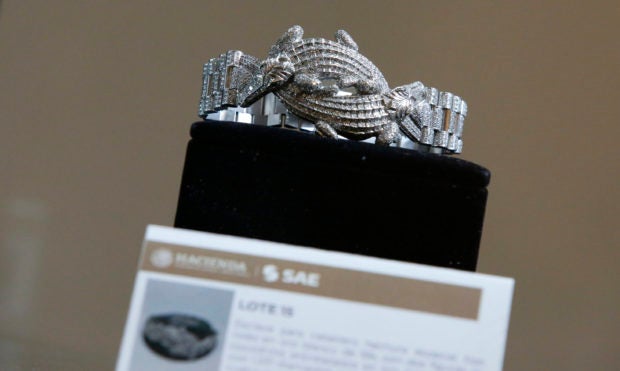 A men’s bracelet made of 18K white gold and featuring two crocodiles entwined and covered with 1,331 diamonds is displayed to the public during an auction of government seized jewelry at Los Pinos Cultural Center, formerly the presidential residence, in Mexico City, Sunday, July 28, 2019. (AP Photo/Ginnette Riquelme)

“I imagine the guy that had that type of jewelry made was one of the bosses,” Palma said.

Some of the most ostentatious items did not sell, such as a white gold Montblanc fountain pen adorned with 104 emeralds, 104 rubies and 80 diamonds — in the shape of the Mexican flag. Nor did a Piaget watch with 227 white diamonds splashed across the face and wrist band.

Susana Sánchez, another onlooker, laughed as she riffed about the possible backstory of the diamond-draped Piaget. She pictured a drug kingpin having given it to his scorned lover or wife in an attempt to make amends.

“There’s guilt behind that gift,” Sánchez said as she exited a room filled with display cases of jewelry.

Sánchez came away feeling she got a glimpse into the narco world, and was impressed by the amount of money they spend on baubles.

Auctioneers warned bidders that the items came with no guarantee, and no possibilities for returns.

Auction participant Antonio Vela hoped to pick up a gold chain for personal use, while bidder Jorge Camacho snagged a Cartier watch and assorted gold-plated items that he hoped to sell in a secondhand shop.

“There’s a market for everything,” said Camacho. /gsg