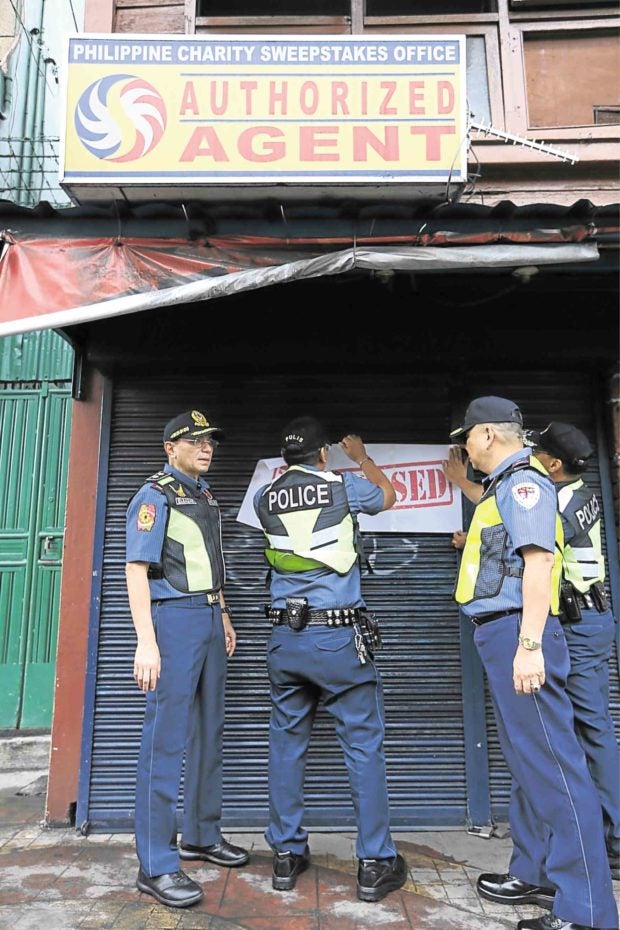 MANILA, Philippines — Marites, 47, woke up early on Saturday to collect the bets for Small Town Lottery (STL) in her neighborhood in Booy village in Tagbilaran, Bohol, where she has been working as a kubradora (bet collector) for about five years.

When she was about to hand over her collection, Marites was told by her coordinator to return the money to the individual bettors because President Rodrigo Duterte had ordered a halt to all games operated by the Philippine Charity Sweepstakes Office (PCSO).

Without elaborating, the President cited “massive corruption” as the reason for his order, which sent police officers scrambling to padlock lotto outlets nationwide and left an air of uncertainty among thousands  who depend on the state-run lottery for their livelihood.

In his video message aired on social media by the Presidential Communications Operations Office on Friday night, the President said:

“Pending investigation, lahat po ng laro ng (all games on) lotto, STL, Peryahan ng Bayan, or whatever nature …. I said all gaming activities… that got their franchise from government through PCSO are, as of today, suspended or terminated because of massive corruption.”

“So it becomes illegal because as of today all of those permits and concessions, and whatever are terminated,” he added.

“The ground is massive corruption involving all, including the courts who repeatedly issued injunctions to paralyze government and to allow corruption to thrive,” the President said.

Lotto and STL outlets nationwide were closed by the police, enforcing the President’s order on Saturday morning.

Presidential spokesperson Salvador Panelo said the President “will identify the culprits in due time and the full force of the law will come crushing down on them.”

The PCSO was last rocked by controversy when the President fired Alexander Balutan as the agency’s general manager on March 8.

He replaced Balutan with former Cebu police chief Royina Garma who assumed office last week. A news report quoted her as saying that the President told her “to do what is right … for the PCSO.”

A large group of STL operators met with Garma on the night the President announced his order.

In a statement, the PCSO advised its customers that its “games are suspended, pursuant to the directive of President Rodrigo Roa Duterte” and that “all players with advanced play tickets are advised to keep their tickets until further notice.”

Justice Secretary Menardo Guevarra ventured to say that the President’s order could be “a temporary suspension only.”

The impact of the order was immediately felt by game outlet operators and bet collectors.

Cesar Pamaong, a lotto operator in Barangay Cogon, also in Tagbilaran, had to close his outlet which he had been operating since 1999.

In Quezon province, STL bet collector Corazon Jaime said in an interview, “We were all shocked. Some of us were crying when we heard the news.”

Jaime is a bet collector employed by Pirouette Corp., the licensed STL operator in the province since 2006 when the lottery was launched there by PCSO with the aim of eliminating the illegal numbers game “jueteng.”

Jaime went pleading for STL operations to be resumed in the province. “Many of us will go hungry, Tatay Digong,” she said crying.

Juan Bandola, an operator of two lotto outlets in Legazpi City, Albay, said: “Just last week, I paid the fees for another franchise, it should be refunded. How will we pay for the rental of space for our outlets if we will not operate anymore. How can we get the return of our investment especially the franchise fee?”

Bandola said he has paid the Government Service Insurance System P25,500 as surety bond, apart from P3,750 each for the renewal of application for lotto and Keno.

“What could we do? The order came from the OP (Office of the President)?” said an STL operator from Southern Luzon who declined to be named.

Mario Avanzado, another STL bet collector from Quezon, said “we’re all former jueteng bet collectors. But we don’t want to return to jueteng. We don’t want to become the target of police arrests again once the jueteng operator and police officials disagree on the amount of bribe money.”

He said jueteng has long been out of business in the province since the introduction of STL.

“But with the order of Digong, jueteng will be surely resurrected and bribe money will change hands again,” Avanzado said.

Just last month, the President said of the illegal numbers game that, “for as long as the economy does not really provide food on the table for so many families, hayaan mo na lang ’yan. (Just leave it be.) …. Kasi hindi ko talaga rin kaya. At pagka sinira ko ’yan, ang papalit sa apparatus niyan droga. (Because I cannot tackle that. And if I dismantle it, drugs will replace that apparatus.) So choose between the lesser evil.”

The Federation of Free Workers warned that PCSO’s patrons might “use their betting money for illegal numbers games.”

Alan Tanjusay, spokesperson of the Associated Labor Unions-Trade Union Congress of the Philippines (ALU-TUCP), pointed out that indigents who rely on PCSO’s revenues will be affected by Mr. Duterte’s order.

According to Balutan, about 1,500 indigents troop to PCSO daily to avail themselves of financial aid.

Last year, PCSO recorded an estimated profit of P64 billion. Thirty percent of this profit goes to the agency’s Individual Medical Assistance Program, which is also one of the identified sources for the universal health care (UHC) program.

Finance Secretary Carlos Dominguez III had earlier said the P195-billion program will be sourced from the national budget and revenues from the “sin” taxes, as well as the Philippine Amusement and Gaming Corp. and PCSO.

“We are evaluating the immediate effects of the ban [on PCSO games],” Dominguez said on Saturday.

But he added: “The management of sin tax funds and other funds should be managed well by reducing wastage … I’m certain that DBM (Department of Budget and Management) and Congress will find a way to address this problem. We need to plug the leaks. We can’t just raise funds.”

His fellow physician Minguita Padilla, coconvener of Doctors for Truth and Public Welfare, said, “[We] hope that the cleanup [of the PCSO] will be swift so that the funding can commence soonest … It’s better to delay the implementation of UHC in order to purge [agencies] of corrupt elements rather than rush its implementation under an organization with pervasive corruption.”—With reports from Julie Alipala, Julie M. Aurelio, Ben O. de Vera, Joey A. Gabieta, Melvin Gascon, Dale Israel, Williamor Magbanua, Kimberlie Quitasol, Villamor Visayas Jr., Mariejo S. Ramos, Jerome Aning, Maricar Cinco, Delfin Mallari Jr. and Ma. April Mier-Manjares