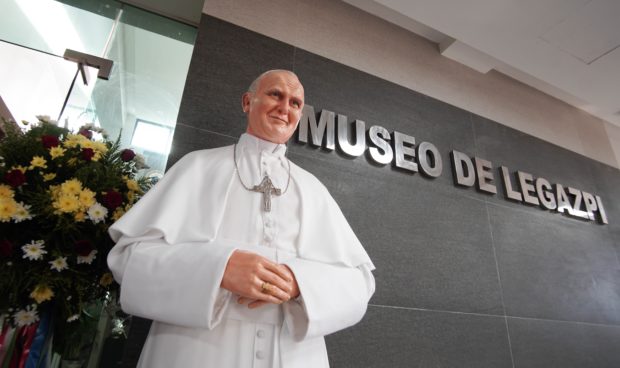 REMEMBERING ST. JOHN PAUL Museo de Legazpi has opened an exhibit of memorabilia from the late Pope John Paul II’s visit to the capital of Albay province on Feb. 21, 1981. Now called St.
John Paul the Great, the pontiff said a Mass for farmers to honor manual labor during his visit. —PHOTOS BY MARK ALVIC ESPLANA

“Seeing him personally brought happiness far different from when we could only hear him on the television,” said Anson, who was only 20 years old when Polish-born Karol Józef Wojtyla, now St. John Paul the Great, set foot on Albay’s capital.

Mementos of that event are now on display at Museo de Legazpi’s moving gallery, reminding Anson of the time John Paul celebrated a Mass for farmers on Feb. 21, 1981, three days after the pontiff beatified San Lorenzo Ruiz.

Benita Calleja, 84, who lived near the Mass venue, was running out of words in recalling that event.

On display till October

“When I saw this [exhibit], all the memories of [the time] he was here came back to me,” said Calleja, who is the mother of a youth representative who welcomed the pope. “When he was saying the Mass, it was so wonderful, I cannot express it.” 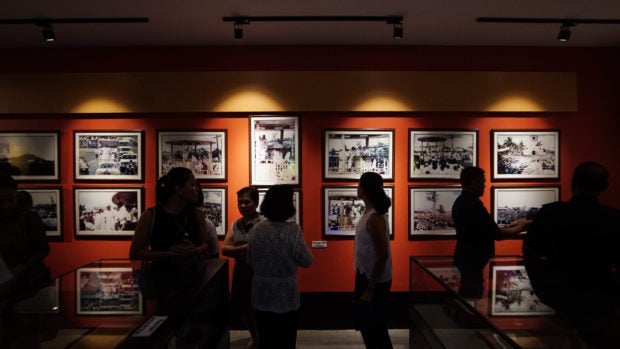 The mementos will be exhibited until October and entrance is free, said museum curator Darlito Perez.

The exhibit features a life-size sculpture of the pope by Bicol artist Juanito Napay III, and includes the table used as an altar during the Mass, the papal chair, and some commemorative stamps of John Paul II’s beatification and visits to the Philippines.

There are also newspaper and magazine clippings, copies of programs of the Bicol visit, vintage P2 and P5 bills marking San Lorenzo Ruiz’s beatification and canonization, a 1981 souvenir fan and other items used during the pope’s Mass.

Msgr. Crispin Bernarte Jr., one of the researchers for the exhibit, was the chancellor in charge of documenting the pope’s 1981 visit.

He said the Diocese of Legazpi received funding support from other congregations to host the pope.

“The Diocese of Legazpi was not a rich diocese, but in spite of the logistics (required), we never experienced any difficulty because the congregations, the help, were coming from all over Bicol,” Bernarte said.

“There was an overwhelming feeling of gratitude. The Bicolanos were thankful for having been chosen as a venue for the visit of the pope during the time. That’s why, as an expression of their gratitude, there were so many charitable congregations,” Bernarte told the Inquirer.

John Paul arrived in Legazpi on the first-ever Boeing jet that landed on its airport. Before the plane landed at 8:15 a.m., Philippine Airlines gave the pope a stunning view of Mayon volcano.

Museum curator Perez was only 4 years old then but remembers that on the night before the visit, the streets of Legazpi were already beginning to fill with visitors.

John Paul celebrated the Mass on a stage shaped like a “salakot,” the conical wide-brimmed hat worn as protection against sun and rain.

In his homily, the pope acknowledged the sacrifices of farmers who at that time were earning less than the daily wage of P30. He said they deserved “appreciation and grateful esteem.”

“The rural world truly possesses enviable human and religious riches: a deep-rooted love of the family and of peace, a religious sense, an appreciation of friendship, trust and openness to God, and devotion to the Blessed Virgin Mary, particularly in your case under the title of Our Lady of Peñafrancia,” the patron saint of Bicol, John Paul said. 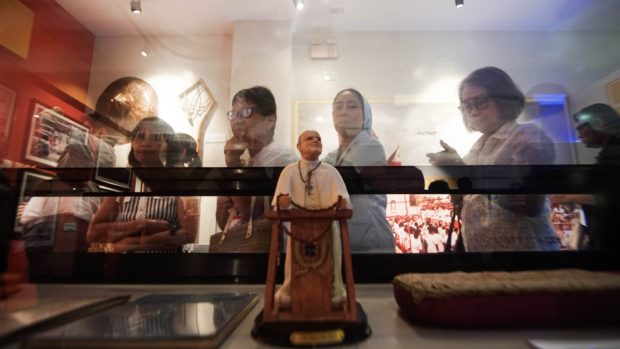 In a message to labor leaders and businessmen, he said: Give work to everyone and pay wages sufficient to sustain daily living.

“Workers should have a real and just share in the wealth that they help to produce in enterprises, in professions and in the national economy,” the pope said.

Legazpi Bishop Joel Baylon, then on his third year as a priest, recalled that on the eve of John Paul’s visit, the streets near Peñaranda Park were full of people.

Love for the young

“They slept here so they could have easy access to the Holy Father,” he said.

“He was a pope with a very special love for the young. He was the one who started World Youth Day. And I think this is the reason why he is coming around, because we are celebrating the Year of the Youth,” Baylon said.

The Philippine Catholic Church observes 2019 as the “Year of the Youth.”

“This is one of the memories we make sure we don’t forget,” he said. “We remember these things because they hold a very special place in our hearts. And this historic event of the Holy Father, and now St. John Paul II, coming to Legazpi is something that would maybe never be repeated by (another) pope.”

Coronavirus: ‘Pharmacy of the world’ India in overdrive