Opposition rallies as Venezuela blackout eases in some areas

CARACAS, Venezuela – Venezuela’s opposition on Tuesday sought to harness anger over a massive blackout that deepened hardship nationwide, but turnout at a Caracas demonstration was relatively modest as many Venezuelans despair of an imminent solution to their plight. 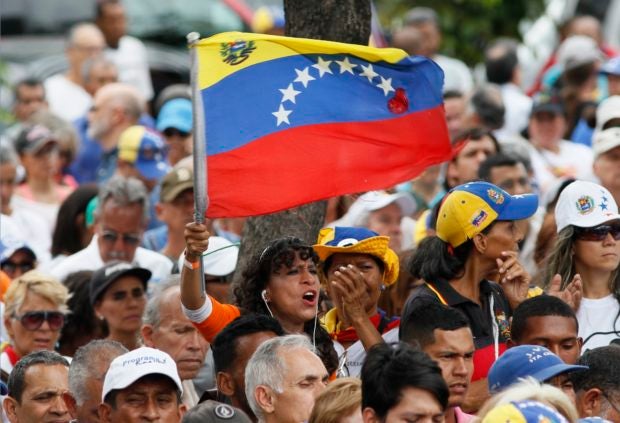 A supporter of opposition leader and self-proclaimed interim president of Venezuela Juan Guaido waves a Venezuelan national flag during a National Congress session in a main square in Caracas, Venezuela, Tuesday, July 23, 2019. At the gathering, the congress approved Venezuela’s return to the Inter-American Treaty of Reciprocal Assistance, a U.S.-led defense pact that could provide political cover for greater international involvement in the nation’s crisis. (AP Photo/Leonardo Fernandez)

Lights came back on in parts of the capital and other areas of Venezuela overnight following a nearly nine-hour outage that the government blamed on an “electromagnetic attack” against the power grid, without providing any evidence. Government opponents say years of mismanagement and corruption were to blame.

Electricity supply remained unstable in many regions. The blackout knocked out communications and the Caracas metro on Monday, forcing commuters to walk home or hustle for a spot on packed buses. The metro remained out of operation Tuesday.

The scenes in the capital were familiar, even though Caracas has been mostly spared the debilitating power cuts that persisted in other parts of the country after nationwide outages in March. The latest blackout didn’t make much difference to people with scarce power in Maracaibo, Venezuela’s second-largest city.

Maritza Arámbula, a Maracaibo resident, said she was tired of a government that makes “excuses” and an opposition continually seeking support from Venezuela’s exhausted citizens.

“We need solutions, not promises,” Arámbula said. “Not having light makes me sick.”

In Caracas, the opposition-led congress held a session in a main square to try to keep pressure on the government of President Nicolás Maduro, who has defied U.S.-led efforts to oust him. Opposition leader Juan Guaidó appeared in front of bunting in the colors of the Venezuelan flag — red, blue and yellow — and said, as he often has in the past, that the government he calls a “dictatorship” is crumbling.

At the gathering, the congress approved Venezuela’s return to the Inter-American Treaty of Reciprocal Assistance, a U.S.-led defense pact that could provide political cover for greater international involvement in the nation’s crisis. However, Maduro’s government was not expected to heed the opposition move.

In addition to congress deputies, hundreds of other people attended the event, a smaller crowd than the throngs that poured into the streets in January when Guaidó declared he was interim president and that Maduro’s 2018 re-election was a sham. Some activists said the turnout was low because public transport wasn’t available, though opposition demonstrations in Caracas have diminished in size over several months. /gsg