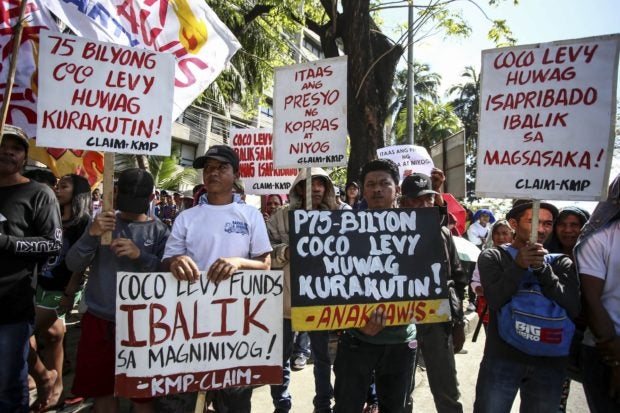 FUND FOR FARMERS Coconut farmers, demanding the return of P100 billion in coco levy funds to them through cash and social benefits, and the genuine development of the industry, picket in front of the Philippine Coconut Authority in Quezon City in January. —JAMSTA. ROSA

MANILA, Philippines — ’Farmers’ groups doubt whether President Rodrigo Duterte’s proposal to invest the P100-billion coconut levy fund in a trust fund could provide the money to those who need it the most—the small coconut farmers.

“What we need right now is the utilization and the disposition of levy funds and assets for the direct benefit of the farmers,” said Omi Royandoyan, vice chair of Centro Saka Inc.

Royandoyan said there was no urgency in the President’s statement in his State of the Nation address on Monday to bring the fund to the farmers.

Maribel Luzara, president of Kilusang Magbubukid ng Bondoc Peninsula, said she had wanted to hear one thing from the POresi. “We want the distribution of the coco levy funds,” especially because of low copra prices, she said.

Luzara said distributing the funds to farmers would help them amid low copra prices, which stems from a global supply glut.

In his speech, the President pushed for the passage of the coconut trust fund bill to uplift the lives of the coconut farmers and to develop the industry.

He suggested that the coco levy fund be invested for the long-term so it could grow rather than be immediately distributed to the farmers.

The President said he would just allocate a sum for “improvements in planting coconut” because it would be difficult to trace the owners of the fund. Only P5 billion should be used to improve the planting of coconut, while the rest should be put in a trust fund, he said.

“If it is distributed, all of it like sprinkles, then it will be gone. The one distributing it will get his share as well,” he said.

The coconut levy was imposed by the dictator Ferdinand Marcos on the produce of coconut farmers between 1973 and 1982, supposedly to develop the coconut industry. Only the dictator’s cronies, however, benefited from the fund.

Through Republic Act No. 6260, a tax of 55 centavos was imposed initially on the first sale of every 100 kilos of copra.

Upon collecting the initial P100 million, the Philippine Coconut Authority (PCA) established the Coconut Investment Fund on behalf of the coconut farmers. The fund has since grown to P100 billion.

Presidne jDuterte said he was looking for an “honest man” who could administer the fund.

For Fr. Edwin Gariguez of Caritas Philippines, the President’s call for the passage of the coco levy bill was one of the good policy agenda in the 2019 State of the Nation.

“His position not to directly distribute the fund but to create a trust fund is wise,” said Gariguez, executive secretary of Caritas Philippines, the social action arm of the Catholic Church.

But Gariguez said the full participation of farmers’ groups in the fund’s management must be ensured. “[This is to] curb corruption and to make sure that interests of the coco farmers are considered.”

In February, the President vetoed the coco levy fund bill that would have created a P100-billion trust fund for the benefit of 3.5 million coconut farmers.

The President explained that he vetoed the measure because it lacked “vital safeguards” to avoid past mistakes.

He also rejected the bill that would have strengthened the PCA.

“He also talked about the [coco levy fund] bill [in his third address to Congress], although with less emphasis. And yet Congress watered down and mangled the bill,” said Joey Faustino, leader of the Coconut Industry Reform Movement.

The President’s allies in the House of Representatives and the Senate “had in fact, been undermining the proposal of farmers for the establishment of a trust fund and a trust fund committee,” said Danny Carranza, secretary general of Kilusan Para sa Tunay na Repormang Agraryo at Katarungang Panlipunan.

He said a “very powerful president who cannot mobilize his allies to fulfill his promise to the poor makes his pronouncements empty, mere populist promises.”

Carranza said PrewdDuterte’s pledge to use the coco levy fund for the benefit of small coconut farmers was a “rehash of his election promise.”

“[T]he promise remains a promise while coconut farmers nationwide are reeling from deeper poverty due to record low prices in coconut and copra, a situation he was silent about,” he said in a statement on Tuesday.

While campaigning for the presidency in Catanauan, Quezon province, in 2016, the President promised that the funds would be distributed to coconut farmers within 100 days of his administration.—Reports from Karl R. Ocampo, Delfin T. Mallari Jr., Tina G. Santos, Julie M. Aurelio and Inquirer Research