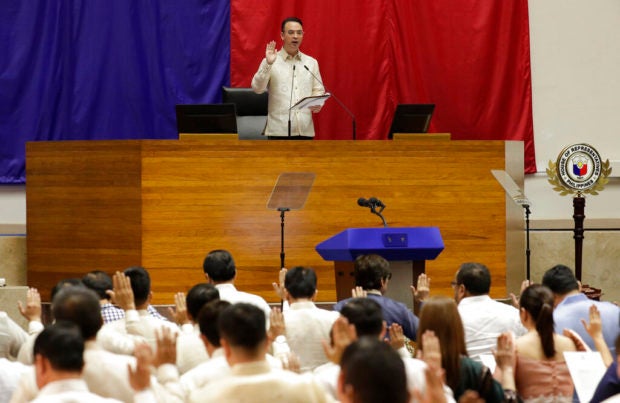 While newly installed Speaker Alan Peter Cayetano has prevailed over rival factions in the House of Representatives, including the Davao bloc led by President Duterte’s own children, his victory might be short-lived, an opposition lawmaker warned on Monday.

After all, the 2022 presidential election is already on the minds of many House members, Bayan Muna Rep. Carlos Zarate said.

“So for now, it appears one faction won over the other, but that is not to say that that faction will eventually be victorious come 2022,” he told the Inquirer.

The Makabayan bloc leader predicted that a “war of dominance” would persist through the 15 months that Cayetano would serve as House leader under his term-sharing deal with Marinduque Rep. Lord Allan Velasco, who would take over for 21 months after that.

“In fact I think it will be more ‘bloody’ in the next three years because there will be more casualties as their interests can no longer be put in one place,” he said.

Such is the fractiousness of the coalition of the supermajority, whose only “common denominator” is the President, said Zarate, whose group joined the minority coalition.

On Monday, Davao City Rep. Paolo Duterte nominated and voted for Cayetano as Speaker, giving up his attempts to sway the 300-strong chamber into supporting the Duterte coalition, a new alliance loosely composed of members of the regional Hugpong ng Pagbabago party and his own local Hugpong sa Tawong Lungsod party.

The younger Duterte said he and his sister, Davao City Mayor Sara Duterte, had opted to respect their father’s wishes.

By most accounts, however, the President had personally stepped into the fray, warning the lawmakers he would skip his own State of the Nation Address unless they fell in line.

They did on Monday morning, and elected Cayetano as Speaker by a 266-28 vote, with two abstentions and a no-vote.

But when he took the podium, Representative Duterte expressed his displeasure with the term-sharing agreement. He noted that a new Speaker must be elected after 15 months, hinting that a Velasco succession might not be a done deal.

Velasco downplayed the comment, saying Duterte was “just reiterating his stand that he’s opposed to term-sharing.”

But Velasco acknowledged that he was at the mercy of his colleagues on whether they would honor the deal.

“At the end of the day, we really don’t know what will happen in 15 months. Of course, I leave it up to my colleagues,” he said.

“So hopefully by the 15th month, as he said, he will step down, and then, like I said, we’ll still go back to an election for the next House Speaker,” Velasco said.

Zarate said he doubted it would be so smooth: “Who can say nothing will happen within 15 months, especially as 2022 approaches?”

“Take a look: Last year, Speaker [Pantaleon] Alvarez’s support was so solid, yet in two years he was ousted [by Gloria Macapagal-Arroyo],” he recalled.

“Now that there are so many factions trying to grab power, to be dominant, the Speaker’s position is very precarious,” Zarate said.

Read Next
Push for federalism on, says Año, but it’s dead for Drilon
EDITORS' PICK
New strategies urged to improve public transport
Chaos as thousands return to work in Metro Manila
Cherry Mobile teams up with Cloud Panda PH, launches online store
Leveling up your ‘lutong bahay’ with the kitchen companion you never knew you needed
Senate OKs on 3rd reading bill allowing school opening after August
Someone from the Philippines can become $356 Million richer this Tuesday
MOST READ
‘If I had not been SolGen, I will make you eat your words,’ Calida tells Coco Martin
51 percent of German firms holding back investments in PH, but not because of COVID-19
Chaos as thousands return to work in Metro Manila
Restaurant dine-in operations approved in MGCQ areas
Don't miss out on the latest news and information.