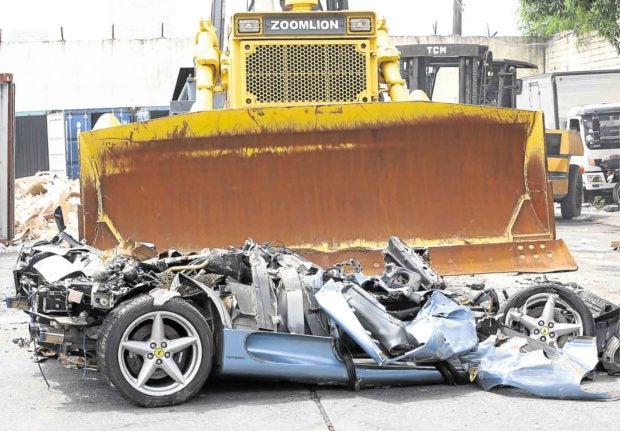 FROM USED TO USELESSA bulldozer reduces a Ferrari to scrap metal at the BOC compound in Manila on Tuesday. The destruction of the P7-million vehicle aims to discourage the smuggling of luxury cars into the country. —MARIANNE BERMUDEZ

MANILA, Philippines — The Bureau of Customs (BOC) destroyed on Tuesday a used sports car worth P7 million that was misdeclared as secondhand auto spare parts, along with a dozen machines used to make hundreds of thousands of counterfeit cigarettes.

According to Customs Assistant Commissioner Vincent Philip Maronilla, the destruction of the Ferrari was in line with President R Duterte’s directive not to auction off seized luxury cars to “make it as unprofitable as possible” for erring importers to smuggle these into the country.

“We are destroying [the luxury cars] because we feel that in the long run, we will benefit more—the BOC and the industries which really engage in the legitimate importation of luxury vehicles,” Maronilla told reporters.

The BOC used a bulldozer to crush the Ferrari which was consigned to Camama Autohub. Valued at P7 million, it arrived at the Port of Manila from Italy in May.

Maronilla said that the car was misdeclared as used auto parts. Even if it no longer had its doors and hood, it was still considered as a completely built unit.

He added that stripping vehicles of some of their parts was one of the schemes used by smugglers to avoid paying higher taxes and escape detection by authorities.

Apart from being stripped of its accreditation, Camama’s past dealings with the bureau were also being scrutinized.

At the same time, the BOC destroyed 12 cigarette-making machines seized in Tacloban City in February. The machines were used to manufacture counterfeit cigarette brands like Fortune, Mighty and Marlboro, among others.

The bureau estimated that the machines and the cigarettes were worth around P150 million.

Also on Tuesday, Customs Commissioner Rey Leonardo Guerrero urged erring personnel to just “resign or retire early” as he stressed that there would be no let-up in the campaign to finally rid the bureau of corruption.

According to him, customs employees have only two options now—to either stay if they want to join the efforts to reform the agency, or to leave if they could not follow directives to stop corruption.

“If we would part ways, it would be better that we do it properly. They should just resign or retire, which I think are good options,” Guerrero told reporters.

He issued the challenge a day after President Duterte, in his State of the Nation Address, lauded the BOC for breaching its target last year by collecting P585 billion. Mr. Duterte said though that revenues could have been higher if there was less corruption.

Guerrero said that so far, the bureau’s internal administration office had received word that some personnel were offering to resign. “Of course [we welcome the offers]. That’s better because it is a gesture of sincerity.”

But when asked if the BOC would no longer pursue cases against them, Guerrero was noncommittal.

“That would depend on their case. We can’t say for now. The status of the cases are at varying levels—some have been forwarded to the Department of Justice, while some are pending or are ongoing investigation,” he said.

Read Next
Guidelines set for enforcement of Edsa bus ban
EDITORS' PICK
Complete your early Christmas shopping with vivo V25 Series
What’s in a name? ‘Maharlika’ evokes time of mythmaking
The vivo Y16 makes the season of giving more thoughtful for the whole family
China’s Xi unwilling to accept vaccines despite threat from protests — US intel
Easterlies to bring rain in PH on Sunday — Pagasa
House energy committee chair Arroyo bats for cheap electricity
MOST READ
Sunshine Dizon reveals PTSD, depression diagnosis: There’s nothing wrong with asking for help
What’s in a name? ‘Maharlika’ evokes time of mythmaking
Maxene Magalona sees separation from Rob Mananquil as ‘blessing in disguise’: ‘There’s no more anger’
Are we ready for a sovereign wealth fund?
Don't miss out on the latest news and information.