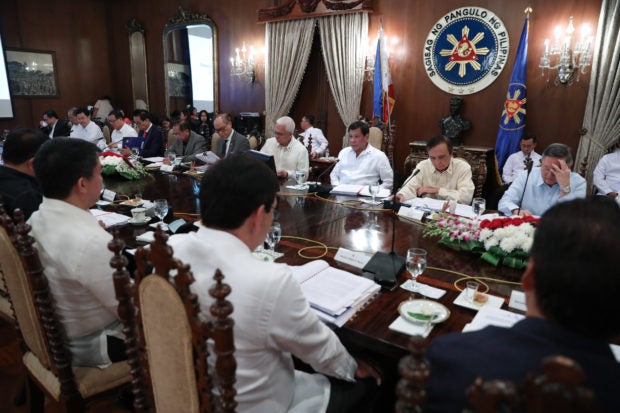 FILE – President Rodrigo Roa Duterte calls for a meeting with the Legislative-Executive Development Advisory Council (LEDAC) at the Malacañan Palace on September 20, 2017. Among the subjects discussed include the anti-corruption drive of the government, amendments to the Government Procurement Reform Act as well as the Bangsamoro Basic Law. ROBINSON NIÑAL JR./PRESIDENTIAL PHOTO

“I suggest that the Legislative-Executive Development Advisory Council (LEDAC) which is chaired by the President himself, be convened at the earliest possible time so that both the Executive and the Legislative branches of government can arrive at a Common Legislative Agenda (CLA), similar to what we did during the 17th Congress,” Velasco said in a statement.

The district lawmaker, who is expected to take over the Speaker seat after Speaker Alan Peter Cayetano finishes his term based on their term-sharing deal, also said the Executive, the Senate, and the House of Representatives should agree on which bills in the CLA would be prioritized.

Velasco said he already filed bills that aim to support the President’s goals such as postponing the barangay elections to from May 2020 to October 2022, institutionalizing the Reserve Officers’ Training Corps (ROTC), and rightsizing of government bureaucracy.

During his fourth State of the Nation Address, Duterte spelled out some bills he wants Congress to pass. Among these measures were the reinstatement of the death penalty for heinous crimes, drug-related offenses and plunder, mandatory ROTC for grades 11 to 12, postponement of the local polls, and creation of the departments for water and overseas Filipino workers, and disaster resilience.