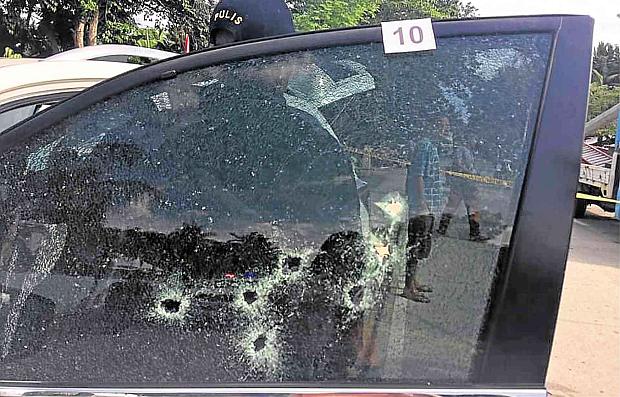 BACOLOD CITY, Negros Occidental, Philippines — Anthony Trinidad studied physics, wanted to be an engineer but became a lawyer to help those who could not afford legal services.

He was known as a low-key, soft-spoken and gentle person who barely raised his voice.

On Tuesday, the 53-year-old who had been tagged as a supporter of communist rebels on Negros Island was killed in an attack by motorcycle-riding gunmen who also wounded his wife.

Trinidad was shot in broad daylight as he was driving his car in his hometown of Guihulngan City in Negros Oriental province, according to Lt. Col. Bonifacio Tecson, city police chief.

Trinidad’s wife, Novie Marie, also 53, took a bullet in the shoulder but survived.

“The killers were heartless. They shot him several times and made sure he was dead. I cannot imagine this happening to him,” said Trinidad’s younger sister Andrea, a former Inquirer reporter.

On Wednesday, Tecson said Trinidad had been receiving death threats for several months before Tuesday’s attack.

“He was tagged as a supporter of the (New People’s Army, or NPA),” Tecson said.

Trinidad had informed the Guihulngan police that he received a letter with an alleged list of people being targeted for supporting the NPA.

He requested security assistance, which the police provided whenever he attended a hearing, Tecson said.

Trinidad’s family appealed to the government to help them get justice for the slain lawyer, who also left behind two sons and a daughter.

“We are still at a loss on the motives behind this dastardly act because our brother was such a kindhearted, soft-spoken person who was willing to go out of his way to help people in need,” his family said in a statement.

“This spate of killings in our country and the culture of violence have to stop. We cannot and should not constantly live in fear. Stop the killings,” the statement added.

According to the Central Visayas chapter of the rights group Karapatan, Trinidad is the 71st victim of extrajudicial killings on Negros Island under President Duterte.

“Negros lost another freedom-loving son martyred today … He work[ed] to defend poor political prisoners and other victims of human rights violations,” the group said in a statement on Tuesday.

An anticommunist group calling itself Kawsa Guihulnganon Batok Kumunista (Kagubak) included in a flyer the names of Trinidad, his elder sister and Guihulngan Councilor Jessica Trinidad-Villarmente, and her husband, among 15 people it had “judged” and who “would not make it to 2018.”

The group held them responsible for the killing of 10 “innocent civilians.” One former activist on the list, Heidi Malalay Flores, was killed also by motorcycle-riding assassins in August last year.

Karapatan said human rights lawyer Benjamin Ramos, who was shot dead after he provided legal assistance to the families of nine sugar workers who were massacred in Kabankalan City in Negros Occidental province last November, was also on a similar list.

Before Trinidad’s killing, 38 other lawyers and judges had been assassinated since Mr. Duterte assumed office in 2016 until March this year, according to the Integrated Bar of the Philippines (IBP).

The Defend Negros #Stop the Attacks Network said Trinidad handled cases of peasant leaders and siblings Emilia, Maricris and Rene Quirante from 2007 to 2008.

Emilia was municipal chair of Kaugmaon, a peasant organization affiliated with the militant Kilusang Magbubukid ng Pilipinas, while her brother Rene was head of the local chapter of Anakpawis party list. Rene was shot dead in Guihulngan in 2010.

Andrea said her brother did not belong to any group and had been “very focused on his practice, his kids and biking on weekends” since returning home to Negros in the early 2000s after working in Congress.

“‘End the killings!’ is the collective cry among us here living on Negros Island,” Alminaza said. “The ambience of fear and violence must end. Our people are longing for an end to barbaric killings due to the drug war and the anti-insurgency campaign.”

Trinidad, the second of eight siblings, studied law at Silliman University in Dumaguete City and was among the few practicing lawyers in Guihulngan.

As a lawyer, he served clients from all walks of life but was especially generous to those coming from poor families, Andrea said.

“It was usual for him to receive chickens as payments from his clients,” she said.

Trinidad served as a staff member of former Negros Oriental Rep. Jerome Paras and as chief of staff of the late Quezon Rep. Marcial Punzalan Jr.

He and his family transferred to San Carlos City in Negros Occidental in 2013 after a massive earthquake hit Negros Oriental.

He headed a law firm in San Carlos that handled cases all over Negros Island, according to Andrea.