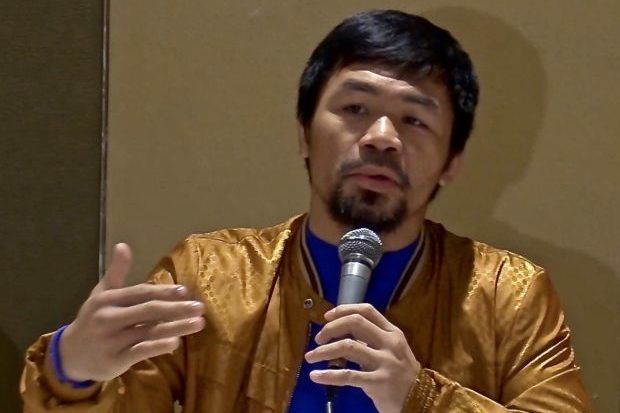 The senator said on Tuesday that he would want a public firing squad execution of those convicted of drug-related crimes, while plunderers would get the lethal injection.

[If it’s a drug case, maybe it should be done by firing squad so that people would not do other same. For plunder, maybe lethal injection would do.]

Pacquiao is one of the four senators who filed bills seeking the reimposition of capital punishment. Pacquiao’s Senate Bill No. 189 wants the death penalty for heinous crimes that involve manufacturing and for trafficking of dangerous drugs.

At first, the senator had proposed that the death penalty be executed by hanging.

[Just kick the chair from under the convict.]

Pacquiao said he would be open to sponsoring the bill on the Senate plenary and tackling it at the committee level.

[That is, if the chair of the committee would designate me to head the hearing on that topic.]

He added that it would be better if President Rodrigo Duterte would certify the bill as urgent to expedite its passage.

The senator also thinks the measure will finally pass the Senate as allies of the President populated the higher chamber.

President Duterte has made another push for the reimposition of capital punishment in his fourth State of the Nation Address.