Venezuela capital in the dark again after massive blackout 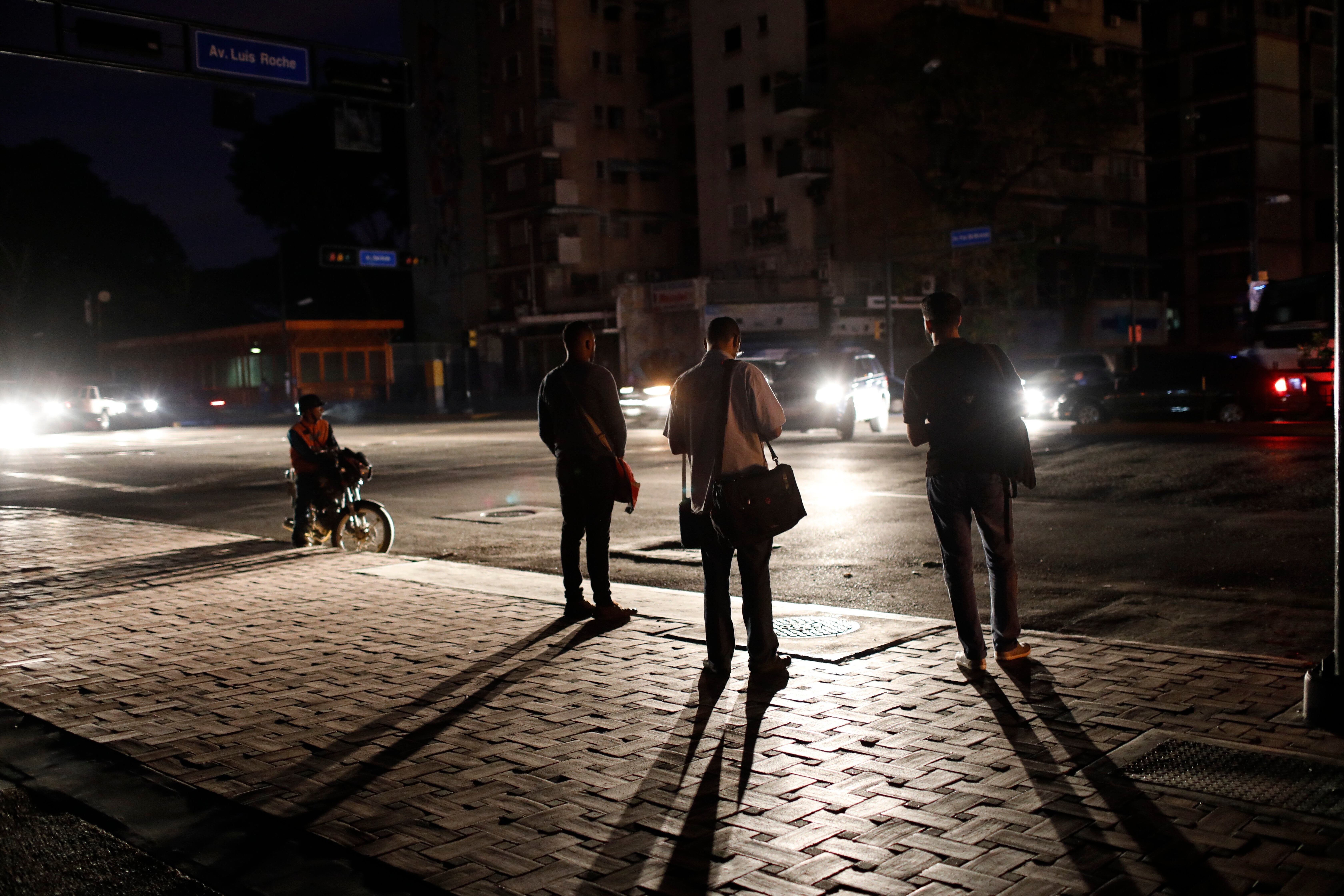 People wait for a public transportation on a street during a blackout in Caracas, Venezuela, Monday, July 22, 2019. The lights went out across much of Venezuela Monday, reviving fears of the blackouts that plunged the country into chaos a few months ago as the government once again accused opponents of sabotaging the nation’s hydroelectric power system. (AP Photo/Ariana Cubillos)

CARACAS, Venezuela  — The lights went out across much of Venezuela Monday, reviving fears of the blackouts that plunged the country into chaos a few months ago as the government once again accused opponents of sabotaging the nation’s hydroelectric power system.

The power in the capital went out after 4 p.m. (2000 GMT) and immediately backed up traffic as stop lights and the subway stopped working during rush hour.

“This is horrible, a disaster,” Reni Blanco, a 48-year-old teacher, said as she joined a crush of people who flooded into the streets of the capital trying to make it home before nightfall.

Almost three hours into the blackout authorities broke their silence and blamed an “electromagnetic attack” on a series of dams located in southern Venezuela — the same culprit it attributed an almost week-long outage in March that left millions of Venezuelans without water or the ability to communicate with loved ones.

“Those who’ve systematically attacked the noble people of Venezuela in all kinds of ways will once again be confronted with the mettle and courage that we, the children of our liberator Simón Bolívar, have demonstrated in the face of difficulties,” Communications Minister Jorge Rodríguez said in a statement read on state TV.

Rodíguez said authorities were working to restore electricity as quickly as possible. He said security forces had been deployed, and contingency plans activated, to guarantee basic medical services and keep streets safe.

But as night fell on Caracas many were wondering how long they would be left in the dark.

“Without light we have nothing,” said María Teresa González, fretting over the meat she had in her freezer if the outage wore on as she walked her dog in the last rays of the evening sun.

Reports on social media said that 19 of 24 Venezuelan states were also affected. Netblocks, a group monitoring internet activity, said network data showed most of Venezuela was knocked offline with national connectivity at just 6% after the latest cuts. Normally non-stop state TV, a key way for the government to keep people informed, was also off the air for a while, adding to frustrations.

President Nicolás Maduro blamed the March outage on a U.S.-sponsored attack against the nation’s biggest hydroelectric dam. More recently, as power service in the politically turbulent capital has improved amid widespread rationing in the interior, officials have even taken to downplaying the outages as similar to a nationwide blackout in Argentina and even one that knocked off the power for several thousand residents of Manhattan for a few hours amid the summer heat.

But his opponents said the outage laid bare years of underinvestment in the nation’s grid by corrupt officials who mismanaged an oil bonanza in the nation sitting atop the world’s largest crude reserves.

“They tried to hide the tragedy by rationing supplies across the country, but their failure is evident: they destroyed the system and they don’t have answers,” opposition leader Juan Guaidó said on Twitter.

Guaidó, who the U.S. and more than 50 other nations recognize as Venezuela’s rightful leader, reiterated an earlier call for nationwide protests on Tuesday.

“We Venezuelans won’t grow accustomed to this,” he said.

Much of the government’s focus since the March blackouts has been on repairing transmission lines near the Guri Dam, which provides about 80 percent of Venezuela’s electricity.

José Aguilar, a U.S.-based power expert who hails from Venezuela, said that alternative power plants running on diesel fuel and gas are unable to make up the difference.

He estimates that since the March outages the country has lost about 1,200 Megawatts of thermal power, or about 40% of its thermal generating capacity at the start of the year, as the government overburdens the fragile system in a desperate attempt to keep the lights on in Caracas and other cities.

“Even in the best-run grids equipment is going to fail,” Aguilar, who is an informal adviser to Guaidó on electricity issues, told The Associated Press. “But when you operate on a limb, outside of safe limits, you expose yourself to these types of domino events. It’s like Russian Roulette.”

Despite the risks of another extended collapse, some Venezuelans were taking the blackout in stride.

Cristian Sandoval, a 37-year-old owner of a motorcycle repair business, said he is more prepared for a prolonged outage having equipped his home with a water tank and a generator for his workshop. As Venezuela’s crisis deepens, the sale of electric generators is one of the few growth industries in a country ravaged by six-digit inflation and cratering public services.

“If the blackout continues we’ll have another round of dessert,” he chuckled while sharing a piece of chocolate cake with a friend at a cafeteria growing dark as the night began to fall.

“But it’s very difficult for the people,” he conceded. “This creates a lot of discomfort.” /muf