MEXICO CITY – Mexico set a new record for homicides in the first half of the year as the number of murders grew by 5.3% compared to the same period of 2018, fueled partly by cartel and gang violence in several states. 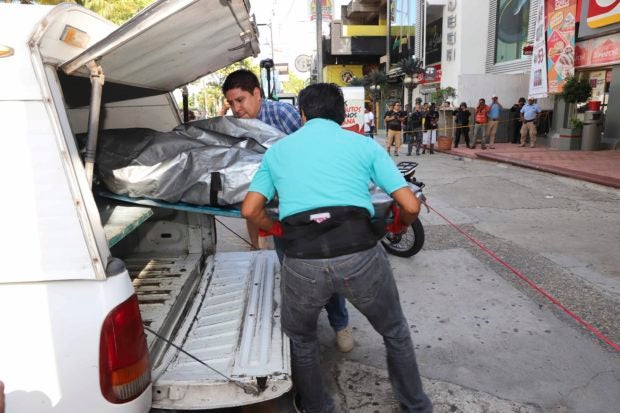 Workers of a forensic service transport the lifeless body of a man who was killed by gunmen inside a bar in the tourist area of ​​Acapulco Guerrero, in Mexico, Sunday July 21, 2019. (AP Photo/Bernardino Hernandez)

Mexico saw 3,080 killings in June, an increase of over 8% from the same month a year ago, according to official figures.

The country of almost 125 million now sees as many as 100 killings per day nationwide. That is the most since comparable records began being kept in 1997, including the peak year of Mexico’s drug war in 2011.

In particular, drug cartel turf wars have become increasingly bloody in the northern state of Sonora, where the number of homicides was up by 69% in the first half of the year. But in Sinaloa, where the cartel of convicted drug lord Joaquin “El Chapo” Guzman is based, homicides declined by 23% so far this year compared to last.

Given cutbacks and a widespread reorganization of security forces under President Andrés Manuel López Obrador, it is not clear who, if anyone, is doing the analysis and intelligence work to find out exactly which conflicts are causing the rise in homicides.

“I could give you 10 potential, plausible reasons, but the truth is we don’t know, and that is perhaps the biggest problem,” said security analyst Alejandro Hope. “There is very little systematic research that would allow us to conclude what is really happening.”

And other types of crime, like extortion, have become increasingly frequent and violent.

As if to underscore that, officials said Monday the five men killed Sunday at a bar in the resort of Acapulco were allegedly part of a gang of extortionists who shook down business owners for protection payments.

Guerrero state prosecutor Jorge Zuriel “we now know that the members of this gang met daily at this bar to coordinate charging extortion payments and to collect the daily take.”

One suspect has been arrested in the shootings, which left six people wounded. Zuriel said the killers were members of a rival gang. /gsg