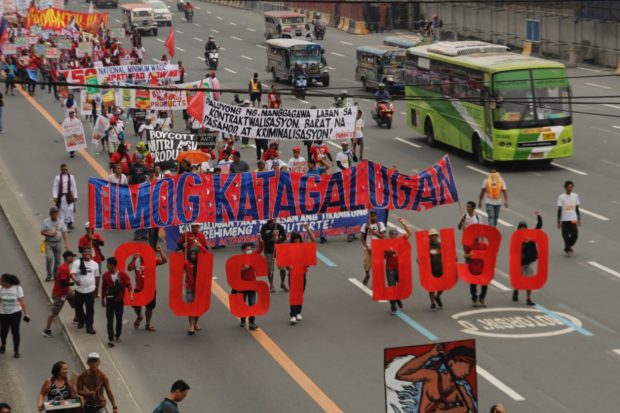 “Mass actions carried out by cause-oriented groups and some pro-government organizations have been conducted peacefully and participants continue to disperse voluntarily with no major untoward incident reported in all areas of engagement where public assemblies were held coinciding with the [Sona],” PNP Spokesperson Brig. Gen. Bernard Banac said in a statement sent to reporters said.

National Capital Region Police Office (NCRPO) reported that over 4,500 individuals participated in anti-Duterte protests while 3,430 persons trooped to pro-Duterte rallies as of 5 p.m.

Banac said PNP will remain vigilant despite no recorded threats during the Sona.

“However, the PNP remains vigilant to prevent occurrence of crimes and ready to respond to any emergency or call for assistance,” Banac said.

PNP chief Gen. Oscar Albayalde earlier said over 14,000 law enforcers from the NCRPO were stationed in command posts along Commonwealth Avenue in Quezon City to maintain safety in the area.