Anti-corruption watchdog to Pacquiao: We admire your lightning speed, but act on raps vs Legarda 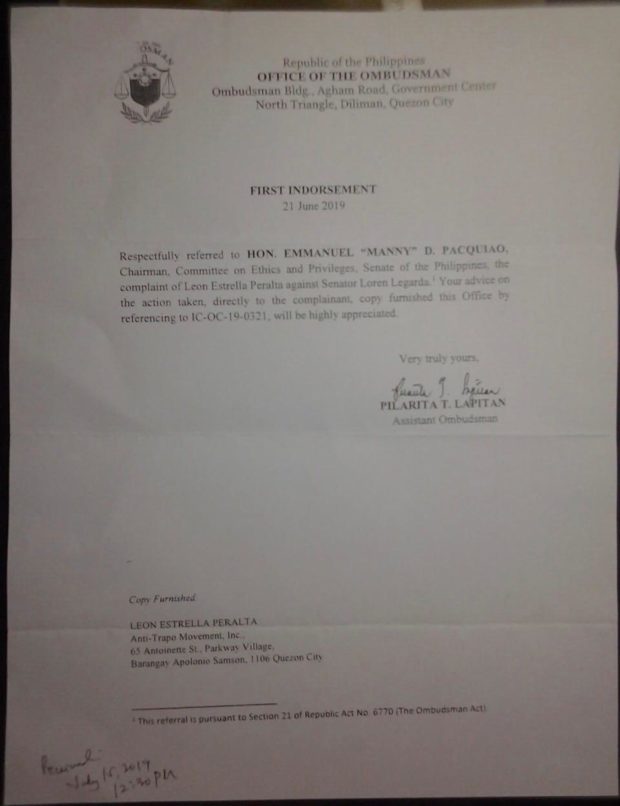 “We admire Manny Pacquiao for the lightning speed of punches he throws against opponents inside the boxing ring,” Anti-Trapo Movement of the Philippines Inc. (ATM) Chairman Leon Peralta said in a statement, regarding Pacquiao’s recent win against boxer Keith Thurman.

“But we find very disenchanting his refusal just to flex a muscle and to act on our complaint.”

The anti-corruption watchdog filed a case against Legarda in December 2018 for allegedly violating the Constitution with the approval of a bill granting a 25-year franchise to Solar Para Sa Bayan (SPSB), which is owned by her son Leandro Leviste.

The complaint was filed before the Senate Committee on Ethics and Privileges, which Pacquiao serves as chairman.

Because of Pacquaio’s supposed inaction, Assistant Ombudsman Pilarita Lapitan has formally asked the senator for an update.

Previously, Legarda said that she abstained from voting on the bill “out of delicadeza.”