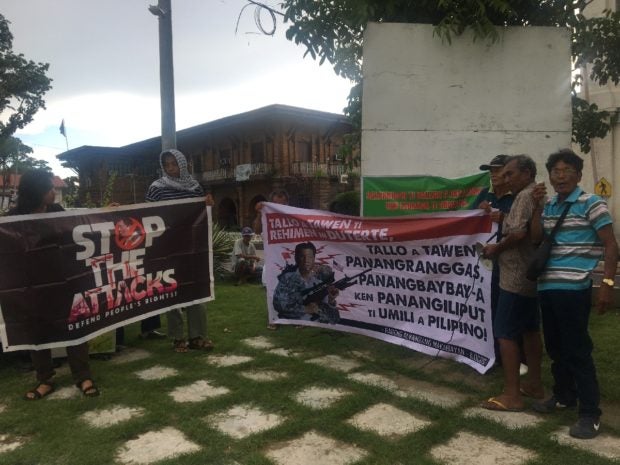 Protesters in Ilocos Norte gather at the Aurora Park in Laoag City to call on President Duterte to look into the worsening plight of farmers, fishermen and indigenous people in the province. (Photo by Leilanie Adriano)

LAOAG CITY –– About 100 farmers, fishermen, and indigenous people protested the alleged military harassment in the province during a protest rally at the Aurora Park here hours before President Duterte delivers his fourth State of the Nation Address.

They protested the Tax Reform for Acceleration and Inclusion law and the soaring inflation rates.

Camilo Galano, president of the Ilocos Norte Fisherfolk Association in Paoay, said they wanted to air their grievances and suggest how the government could help them.

“We are appealing to our government authorities to look after us. We lack fishing gears and what we need is capital to increase our productivity,” Galano said in Ilocano.

Galano said Mr. Duterte should defend the Philippine territory in the West Philippine Sea and think of the welfare of small fishermen.

Rodrigo Limon, a member of the Alyansa Dagiti Mannalon iti Ilocos Norte, called on the government to make good use of the tobacco excise tax of the province and reconsider the implementation of rice tariffication law, which is killing the low-income farmers. /lzb