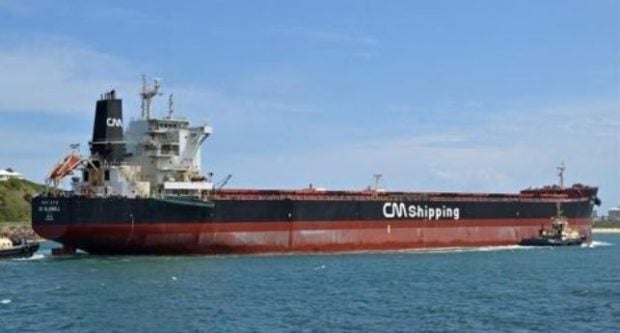 SEOUL — A South Korean freighter was attacked by pirates near the Singapore Strait on Monday, government officials in Busan said.

The pirates armed with guns and knives assaulted sailors of the South Korean-registered vessel, the 44,132-ton CK Bluebell, in the sea about 100 miles from the entrance of the strait at 4:25 a.m. before making off with $13,000 in cash, according to the officials at the Ministry of Maritime Affairs and Fisheries.

No casualties were reported from the attack, they said, noting the captain and a navigator sustained bruises during their confrontations with the pirates.

Besides the cash, some sailors lost their personal belongings, including mobile phones, clothes and shoes, to the attackers, they added.

The CK Bluebell en route to Incheon after departing from Brazil resumed its normal navigation after the attack, they said.

“Ordinary freighters navigate at a speed below 15 knots. But a speed boat operated by the pirates approached the freighter at a speed above 20 knots. Afterward, seven pirates, including one carrying a gun and two armed with knives, got on board and assaulted the sailors for about 30 minutes,” a ministry official said.

The official said the ministry has delivered news of the pirate attack to all Korean-registered vessels near the Singapore Strait and asked them to stay alert.

There were four Koreans and 18 Indonesians aboard the CK Bluebell, which was transporting 68,000 tons of Brazilian corn bound for South Korea after a refueling stop in Singapore. The ship didn’t have any special Marine guard carrying weapons. It was scheduled to arrive in Incheon on July 30.

The Korea Coast Guard, which was notified by its Singaporean counterpart of the incident at 6:33 a.m., said it has asked the CK Bluebell to secure the fingerprints of the pirates and plans to conduct a further investigation following the ship’s arrival in Incheon. Yonhap

ADVERTISEMENT
Read Next
Panelo to Duterte critics : ‘You will be crushed by the galloping horses of change’
EDITORS' PICK
WHO: Indoor airborne spread of coronavirus possible
Water remains our saving grace right now
House panel set to meet for possible decision on ABS-CBN franchise bid
Motostrada expands by handing over ‘Trident’ and adding new ‘Horseman’ to its growing business
Digital hunt for Hyun Bin: 5 challenges for Smartees
No arrests to be made on 1st day of allowed pillion riding for couples — HPG
MOST READ
‘I will always speak up for you’: Server on defending Fil-Am family from racist rant
‘Nouveau’: Agot Isidro hits Jinkee Pacquaio’s show of luxury Hermes, Louis Vuitton bikes
Bela Padilla on being tagged a Diehard Duterte Supporter: ‘Nope, not at all’
Solon withdraws support for ABS-CBN franchise renewal
Don't miss out on the latest news and information.