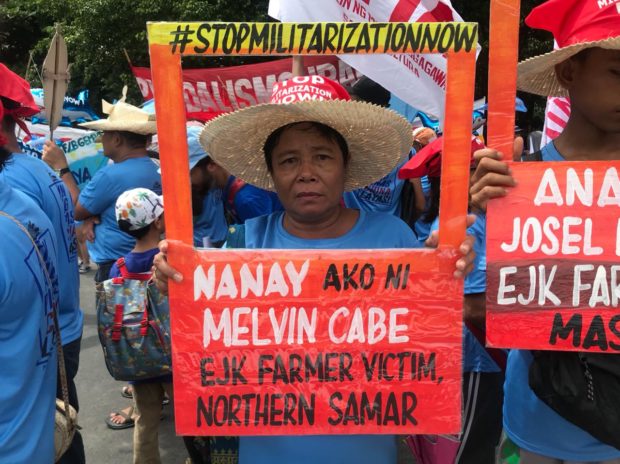 MANILA, Philippines — Two months ago, exactly May 5, a 35-year-old farmer, Melvin Cabe, went out of his house in Las Navas, Northern Samar to look for food for his family.

Melvin was not able to return alive. His lifeless body was brought home to his 52-year-old mother Bienvenida.

He was allegedly shot by soldiers in the province believing he was a member of the communist New People’s Army (NPA).

His body, laid on the ground, was dressed like a communist rebel, and he was given a gun to show that he resisted arrest from state troops, according to the narration of Bienvenida.

(My son went out to hunt for birds to eat. He came across an operation of the military. They shot him. They put on him the clothes of an NPA fighter and gave him a gun. They said he resisted arrest and he was an NPA.)

Bienvenida said local authorities requested to retrieve the body of her son from the military, but it was given to her only four days after his death.

When he asked the military on why her son was killed, she said: “Sinabihan [ako] na NPA ang anak [ko].”

She strongly denied that her son was an NPA rebel.

Bienvenida said she traveled from Northern Samar to Quezon City to join the protest of the National Federation of Peasant Women or Amihan, which describes itself as a “peasant women’s group,” in front of the Commission on Human Rights office in Quezon City to call the attention of the national media.

During the protest, Bienvenida, four other women, and a 15-year-old boy held cardboards that claim their relatives, all farmers, were victims of extra-judicial killings.

The protest happened on Monday, the same day that President Rodrigo Duterte is set to deliver his fourth State of the Nation Address (Sona).

“Nananawagan ako na magkaroon ng hustisya ang anak ko [I am calling for justice for my son],” she said.

In a statement sent to INQUIRER.net, Brig. Gen. Edgard Arevalo, spokesperson of the Armed Forces of the Philippines, said the military “commiserates in what [Bienvenida] professes to be her experience.”

“However, we urge her to file appropriate cases so we can proceed against that alleged military personnel whom she accuses to be the perpetrator(s). That’s part of due process,” he said.

“Let’s not forget what ex-NPA Rebel Priest Conrado Balweg’s revelation was. He and his erstwhile group wear military uniforms before committing attacks and atrocities on civilians to pin the blame on the AFP,” added Arevalo.

He added the AFP guarantees Bienvenida and all Filipinos that the military “does not condone any infractions in its regulations, much more commission of a crime.”

“We will throw the books on any deviant in our organization,” he said. /jpv