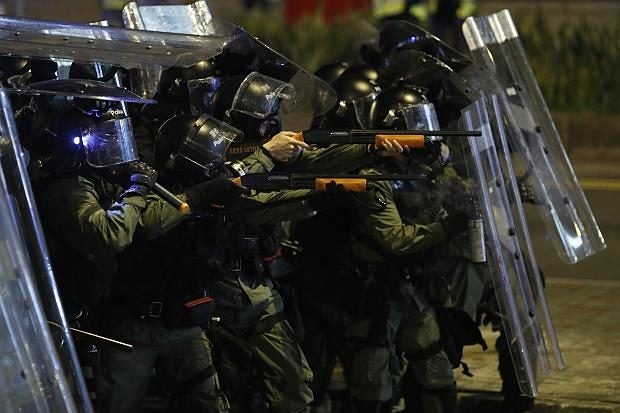 Riot police officers point weapons during a confrontation with protesters in Hong Kong on Sunday, July 21, 2019. Protesters in Hong Kong pressed on Sunday past the designated endpoint for a march in which tens of thousands repeated demands for direct elections in the Chinese territory and an independent investigation into police tactics used in previous demonstrations. (Photo by VINCENT YU / AP)

HONG KONG — Hong Kong’s protest movement took a violent turn on Sunday, as police launched tear gas at protesters after a massive march continued late into the evening, and subway riders were attacked by masked assailants who apparently were targeting pro-democracy demonstrators.

The firing of the tear gas was the latest confrontation between police and protesters who have taken to the streets for over a month to fight a proposed extradition bill and call for electoral reforms in the Chinese territory.

The march had been peaceful when it reached its police-designated endpoint in Hong Kong’s Wan Chai district in the late afternoon, but thousands continued onward, at various points occupying key government and business districts.

They then headed for the Liaison Office, which represents China’s Communist Party-led central government within the city.

Protesters threw eggs at the building and spray-painted its surrounding surveillance cameras. China’s national emblem, which adorns the front of the Liaison Office, was splattered with black ink.

Later, police threw tear gas canisters at protesters to try to disperse them. Protesters scattered, some heading back in the direction of a key business and retail district. Police remained in place, protecting themselves with shields. 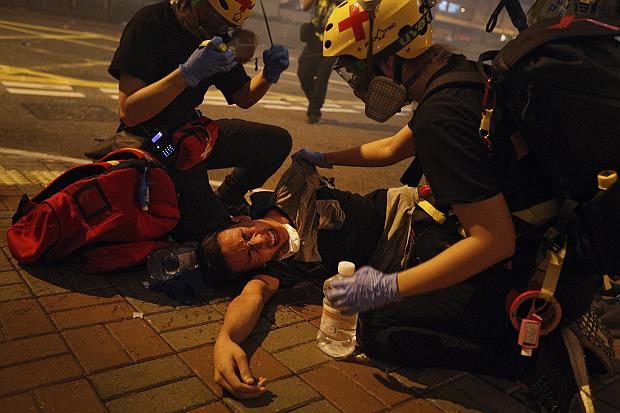 Medical workers help a protester in pain from tear gas fired by policemen on a street in Hong Kong, Sunday, July 21, 2019. Hong Kong police have thrown tear gas canisters at protesters after they refused to disperse. (Photo by BOBBY YIP / AP)

The attackers, meanwhile, were dressed in white with black masks pulled over their heads. On Saturday, demonstrators wore white at a counter-rally in support of police.

Footage from Apple Daily showed the attackers using umbrellas to beat people in the station and inside a subway car. Subway passengers filmed by Stand News and iCABLE angrily accused police officers of not intervening in the attack.

The Hong Kong government said in a statement shortly after midnight that commuters had been attacked at a subway station in the city’s Yuen Long neighborhood, leading to “confrontations and injuries.”

The statement also said that “some radical protesters initiated a series of violent acts … despite repeated warnings” by the police. They said the acts included the hurling of petrol bombs, setting fires and throwing bricks.

“This is absolutely unacceptable to Hong Kong as a society that observes the rule of law,” the statement said, referring to the acts of the subway attackers as well as the protesters.

Organizers said 430,000 people participated in Sunday’s march, while police said there were 138,000 during the procession’s “peak period.”

Large protests began early last month in opposition to a contentious extradition bill that would have allowed Hong Kong residents to stand trial in mainland China, where critics say their rights would be compromised.

Hong Kong’s leader, Carrie Lam, has declared the extradition bill dead, but protesters are dissatisfied with her refusal to formally withdraw the legislation. Some are also calling for her to resign amid growing concerns about the steady erosion of civil rights in the city.

Hong Kong, a former British colony, was handed back to China in 1997 and was promised certain democratic freedoms under the framework of “one country, two systems.” Fueled by anger at Lam and an enduring distrust of the Communist Party-ruled central government in Beijing, the current demonstrations have ballooned into calls for electoral reform and an investigation into alleged police brutality at the protests.

Walking in the sweltering heat, protesters dressed in black kicked off Sunday’s march at a public park, carrying a large banner that read “Independent Inquiry for Rule of Law.”

“Free Hong Kong! Democracy now!” the protesters chanted, forming a dense procession through Wan Chai as they were joined by others who had been waiting on side streets.

“I think the government has never responded to our demands,” said Karen Yu, a 52-year-old Hong Kong resident who has attended four protests since they started. “No matter how much the government can do, at least it should come out and respond to us directly.”

Marchers ignored orders from police to finish off the procession on a road in Wan Chai, according to police and the Civil Human Rights Front, the march’s organizers.

Protesters repeated the five points of their “manifesto,” which was first introduced when a small group of them stormed the legislature earlier this month. Their main demands include universal suffrage — direct voting rights for all Hong Kong residents — as well as dropping charges against anti-extradition protesters, withdrawing the characterization of a clash between police and protesters as a “riot” and dissolving the Legislative Council.

Protesters read the demands aloud in both English and Cantonese in videos released Saturday.

“We did not want to embark on this path of resisting tyranny with our bare bodies,” they said, “but for too long, our government has lied and deceived, and refused to respond to the demands of the people.”

While the demonstrations have been largely peaceful, some confrontations between police and protesters have turned violent. In Sha Tin district the previous Sunday, they beat each other with umbrellas and bats inside a luxury shopping center. Demonstrators broke into the Legislative Council building on July 1 by moving past barricades and shattering windows. Meanwhile, police officers have used pepper spray, tear gas, bean bag rounds and rubber bullets to quell the crowds.

On Friday, Hong Kong police discovered a stash of a powerful homemade explosive and arrested a man in a raid on a commercial building. Materials voicing opposition to the extradition bill were found at the site, local media said, but a police spokesman said no concrete link had been established and the investigation was continuing.

The People’s Daily, the Communist Party’s official newspaper, condemned “radical extremists” who attacked the legislature and “trampled” on Hong Kong’s rule of law in a front-page column Sunday. The paper said the counter-rally Saturday intended to show support for the police reflected “mainstream public opinion” in Hong Kong.