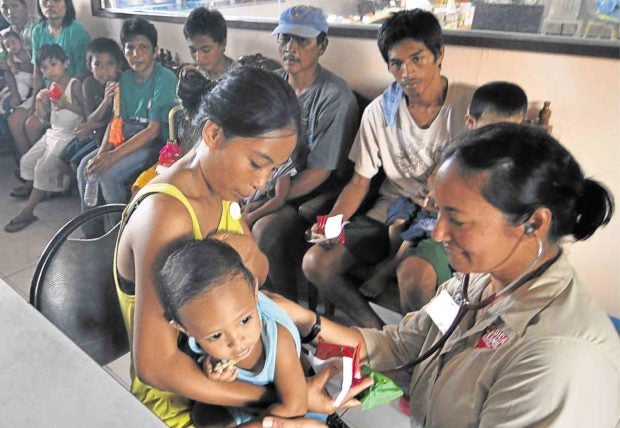 MEDICAL MISSION In this file photo, residents of Villaba town in Leyte province get a health checkup during a medical mission organized by private groups after Supertyphoon “Yolanda” battered Eastern Visayas region. Access to health services has been a longtime problem in remote communities around the country. RICHARD REYES

While she finds fulfillment in her job, the 26-year-old Medina, a resident of Quezon City, feels a pinch in her heart whenever a child dies of a disease that could have been treated if only medical services are accessible to rural areas.

“We have deaths related to lack of access to medical services, especially children who are suffering ordinary ailments like pneumonia or gastroenteritis — diseases which can really lead to death but are still treatable,” she said.

“In an ideal setup, dapat walang namamatay sa ganun (no one should die of such diseases),” Medina added.

Although she didn’t give any figures, she said the impact of the Universal Health Care law signed by President Rodrigo Duterte on Feb. 20 had not been felt in remote towns like Almagro.

Almagro, four hours away by sea travel to Calbayog City on mainland Samar, is a fifth-class municipality with an annual income of not less than P15 million and with a population of 10,600.

It is composed of 23 barangays but only five villages have direct access to services rendered by its rural health unit. The remaining 17 villages are far from the town center or classified as island-barangays, and residents here do not get services from the government due to their location.

Medina, who has been in Almagro for a year and eight months now under the Doctor to the Barrios program of the Department of Health (DOH), said medicines in rural health centers readily run out.

“We have medicine supply in our rural health center but it is not enough. Sometimes, we can outsource from the DOH and the provincial government but they don’t have commitments that they will replenish our supplies every quarter,” Medina said.

Sometimes, she would use her own money to buy medicines needed by the rural health unit.

The Almagro municipal government allocates only P500,000 a year for medical supplies and related items, an amount that she considers low since they are servicing 10,000 people. Medina said a majority of residents could barely buy food, much less medicines.

Parents living in remote island-barangays could not send their children for checkups at their health center due to lack of money and difficulty in transportation.

“We don’t have a circumferential road here in Almagro and there are barangays that are also located on the islands. Traveling to our rural health center means additional expense for them,” Medina said.

In extreme cases, she said, patients have to be taken to Calbayog City for treatment — an expense of at least P2,000 for boat rental.

“We have a motorboat procured by the local government but is managed by the rural health unit. But it’s not available 24/7 due to a number of reasons,” she said.

The town’s rural health unit is being served by Medina, six nurses and a birth attendant.

“We can only provide basic and primary health services. Only a few can provide minor surgery service,” said a municipal health officer on Panay Island, who asked not to be named in this report due to the source’s employment in the government.

One of the main problems of rural health workers on the island, according to the source, is the low salary received by municipal health employees.

Many government doctors receive between P30,000 and P40,000 a month or about the same amount that the lowest ranking member of the Philippine National Police gets. Nurses in rural health units have an entry-level salary of P15,000 month, according to the municipal health officer.

“This affects the morale of our personnel amid our heavy load,” the source said.

With their budget dependent on the priorities of the local government, many municipal health offices suffer from shortage of personnel, including midwives whose services are mostly needed in remote villages.

“A midwife is assigned [to cover] eight to 12 barangays each and the frequency of their visits to each village is weekly at most and up to every other month in some areas,” the health officer said.

A village official in Igbaras town, Iloilo province, said government doctors were only available in the town center.

“We have to travel to the town center if we need [to see] a doctor. Only midwives in health centers are available weekly,” the official told the Inquirer.

Midwives, apart from assisting pregnant women, give only basic health services, among these immunization and deworming for children.

“There has been no significant improvement in health services through the years,” the source said.

But medicines are lacking, even in areas where village and municipal health centers operate.

“We can get free paracetamol, mefenamic acid and medicines for common ailments but we have to buy the medicines prescribed by doctors, like antibiotics,” the village official said.

In Quezon province, a leader of the Agta-Dumagat tribe said tribe members suffering from severe illnesses usually died while being transported to the “nearest” government health facility.

Ramcy Astoveza, a tribe leader and commissioner of the National Commission on Indigenous Peoples (NCIP), said trekking mountain trails in the Sierra Madre mountain ranges in northern Quezon to bring the sick to a hospital or clinic often took a day or two.

“The hardship of long transport is too risky, especially for those who are very sick,” he said.

Astoveza said with government health centers and doctors too far away, tribe members would rely on traditional healers.

He said the NCIP, through the assistance of the DOH and the Department of Social Welfare and Development, had been training qualified indigenous peoples (IP) across the country so they could become certified health workers. These villages are also being equipped with emergency medical equipment and stocks of basic medicines.

“But the Agta tribe in the Sierra Madre in northern Quezon has yet to have one government-trained health worker from among our tribe,” Astoveza said.

“But they can go directly to our office so that we can train them,” Santiago said. She said the provincial government would also provide emergency medical kits and medicines for tribe members.

Santiago said the problem of providing emergency medical care to sick patients in remote areas were now being addressed by the provincial government.

She said her office had three “telemedicine” units, bought from a supplier in the United States for P1.3 million each. The provincial government, she said, plans to buy 15 more units this year.

The portable unit is equipped with cameras, computer screens and other viewing devices to monitor a patient’s vital signs, blood pressure and electrocardiogram, and ultrasound results, among others. It provides chat and video consultations with doctors so patients in remote areas no longer have to travel for consultations, Santiago said.

Read Next
How do you solve a problem like Edsa?
EDITORS' PICK
Legislators among those linked to corruption, says DOJ chief
WHO: Keep guard up even with COVID-19 vaccine nearing rollout
Manufacturing heavyweights weigh in on post-pandemic transportation, logistics, and supply chain in Cisco Live Series
Speed of COVID-19 vaccine development an extraordinary feat
Smart celebrates the Season of Giving with GIGAMANIA
No. 1 smartphone brand realme Philippines, enters postpaid market with first 5G smartphone
MOST READ
‘This is highway robbery:’ Valenzuela mayor shows traffic jam due to RFID payment system
Son of slain peace consultants has message to Sinas
Legislators among those linked to corruption, says DOJ chief
PH going back to ECQ this Christmas season? IATF says it’s fake news
Don't miss out on the latest news and information.