HONG KONG – Police in Hong Kong discovered a stash of a powerful homemade explosive as the semi-autonomous Chinese city readied for another major pro-democracy protest on Sunday following a pro-Beijing rally that attracted thousands. 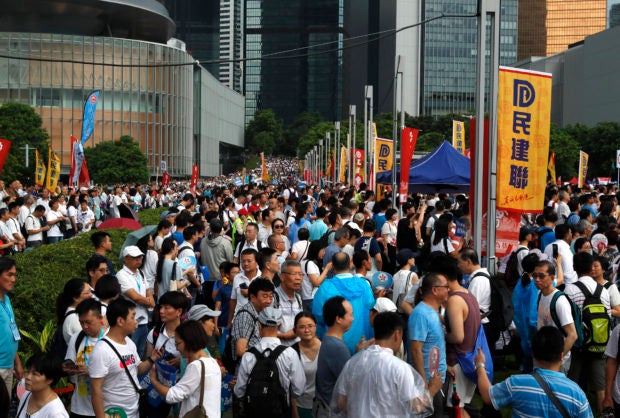 Pro-China supporters gather at a park during a counter-rally in support of the police in Hong Kong Saturday, July 20, 2019. Police in Hong Kong have raided a homemade-explosives manufacturing lab ahead of another weekend of protests in the semi-autonomous Chinese territory. (AP Photo/Vincent Yu)

Police said they found about 2 kilograms (4.4 pounds) of TATP and arrested a man in a raid on a commercial building late Friday night. TATP, or tri-acetone tri-peroxide, has been used in terrorist attacks worldwide.

Materials voicing opposition to an extradition bill that has sparked more than a month of demonstrations in Hong Kong were found at the site, local media said, but a police spokesman said no concrete link has been established and that the investigation is continuing.

In a rally that aimed to counter the pro-democracy movement, thousands of people filled a park in central Hong Kong on Saturday to support the police, who have been accused of using rough tactics on protesters. Some waved Chinese flags, and a giant screen behind the stage for speakers read “Safeguard Hong Kong.”

Many wore white, heeding a call by organizers, and the demonstrators did not wear masks or helmets, public broadcaster RTHK said. The anti-extradition law activists wear black and don protective gear against police pepper spray and batons.

Alick McWhirter, a senior bomb disposal officer, said the seizure of the explosives Friday was the largest of its kind in Hong Kong and called it troubling that such a dangerous substance was being made in a homemade laboratory in the middle of the city.

Police have erected large barricades near government headquarters in preparation for the protest march through central Hong Kong on Sunday. Earlier marches have been largely peaceful, but in a recurring pattern, police have clashed with groups of mostly young protesters who try to take over streets or refuse to disperse after the main demonstration is over.

The extradition bill, which would have allowed suspects to be sent to mainland China to face trial, fueled broader concerns that the freedoms and legal rights of Hong Kong residents are being eroded.

Hong Kong’s leader, Carrie Lam, has declared the bill dead, but protesters are demanding her resignation and an inquiry into the use of force by police to push back and disperse protesters. /gsg