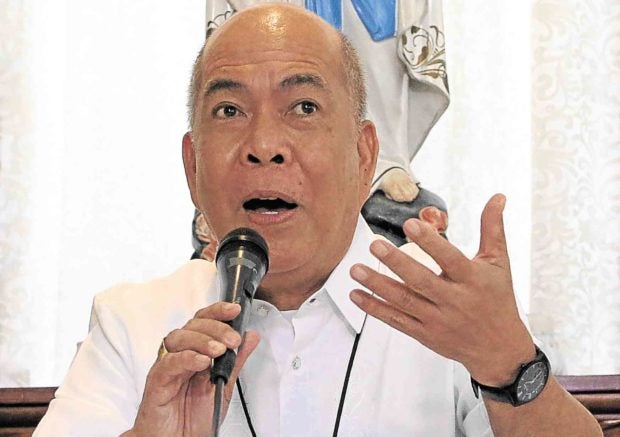 MANILA, Philippines — Catholic clergymen and the oldest human rights lawyers’ group in the country on Saturday condemned the sedition and other charges filed against them in connection with a series of videos linking President Rodrigo Duterte’s family members and associates to the illegal drug trade.

Davao Archbishop Romulo Valles, president of the Catholic Bishops’ Conference of the Philippines (CBCP), said the charges against bishops and priests were “beyond belief.”

The criminal complaints were filed on Thursday in the Department of Justice by the Criminal Investigation and Detection Group (CIDG) of the Philippine National Police against dozens of critics of the Duterte administration, including Vice President Leni Robredo, several bishops and priests, human rights lawyers, opposition senators and senatorial candidates in the May midterm polls.

Free Legal Assistance Group (Flag) said it “strongly condemns” the CIDG’s charges which were based largely on statements by “a witness with absolutely no credibility,” referring to Peter Joemel Advincula, the hooded “Bikoy” in the videos who made the claims against the Dutertes but later recanted and turned against the political opposition.

“The charges are not only baseless, they are meant to silence and persecute human rights lawyers, opposition leaders, and the Church, and to send a message to anyone who dares to criticize this administration,” Flag said in a statement.

Erin Tañada, who also ran for senator in the midterm polls, are members of the lawyers’ group named as respondents in the complaints.

The group was founded in 1974 to defend human rights during martial law under dictator Ferdinand Marcos.

“That they are accused of sedition and other criminal complaints is for me beyond belief,” Valles said in a statement. “These are individuals whose love for country and dedication for the welfare of our people I cannot doubt.”

Their “sincerity, decency, respectfulness and love for our country and our people are beyond doubt,” he added.

Aside from sedition, the PNP-CIDG accused Robredo and the others of inciting to sedition, cyberlibel, libel, estafa, harboring a criminal and obstruction of justice in connection with the production, funding and distribution of the videos.

The police said the videos were meant to agitate the people into staging protests that would lead to the President’s ouster and Robredo’s taking over the presidency.

David, who has repeatedly drawn the ire of Mr. Duterte for his criticism of the administration’s brutal war on drugs, said the charges were “unjust” and “atrocious.”

“They are based on nothing but false testimony. What motivates the supposed witness to give false testimonies is what in fact they (PNP) should be investigating,” David said on his Facebook page.

“The intention is obvious: pure harassment and an effort on the part of the PNP to do, not their sworn duty, but what they think will be pleasing to the higher authorities,” he added.

Reyes said that the complaint was a “desperate move” by the administration to “suppress dissent.”

“It is a pathetic attempt to distract people from the serious issues of the shift to totalitarianism and wholesale betrayal to China,” Reyes said.

Flag reminded the government that it had an obligation to ensure that lawyers could practice their profession “without intimidation, hindrance, harassment, or improper interference” and should not be threatened with various kinds of reprisals for performing their duties.

It said the charges filed by the CIDG were “designed to intimidate, harass and interfere with our lawyers, who are just doing their jobs as human rights defenders.”