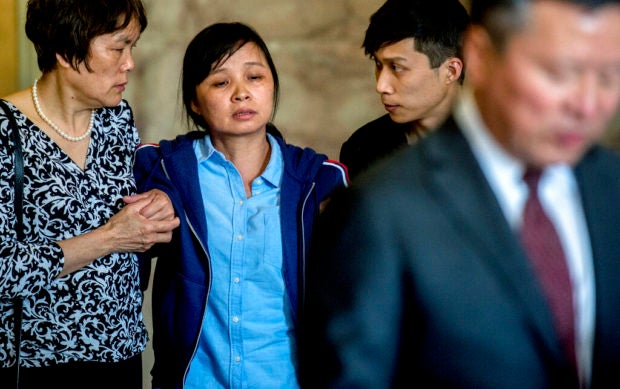 PEORIA, Illinois — Authorities in Illinois have suggested that the remains of a slain 26-year-old scholar from China may never be found despite a vow from prosecutors after her killer was sentenced to life in prison this week that the search will continue.

Brendt Christensen, a former doctoral student in physics at the University of Illinois, abducted Yingying Zhang in 2017 from a bus stop. Prosecutors say he beat her to death at his off-campus apartment, decapitated her and carried her away in a large duffel bag.

In filings before the trial began in June, prosecutors acknowledged they considered a plea deal with Christensen after his arrest in late 2017 in which they would abandon plans to seek the death penalty if he divulged what he did with the remains and where they could be found.

But prosecutors eventually rejected the idea, their filing explains, after concluding it’d be impossible to verify any details that Christensen would provide on the remains and he probably destroyed them.

State and federal officials conducted widespread searches for Zhang’s remains for months to no avail, according to an FBI agent who testified at the trial. They combed the Murdock coal mine and looked in parks and trash bins around Champaign, the university town 140 miles (225 kilometers) southwest of Chicago.

Zhang’s parents have repeatedly appealed to Christensen to tell them what he did with their daughter’s body, describing how important a proper burial is viewed in Chinese culture to provide peace to the dead.

Zhang’s father, Ronggao Zhang , begged for that information again Thursday after jurors couldn’t agree on imposing the death penalty. “If you have any humanity left in your soul, please end our torment,” he said through a translator outside court.

Christensen had an opportunity to divulge where the remains were during his sentencing Thursday, with nothing to lose, after he received a mandatory prison sentence of life without the possibility of parole.

But when the U.S. District Judge James Shadid asked Christensen if he wanted to make a statement, he responded, “No, thank you.”

Minutes later, Shadid sharply admonished Christensen for his “total lack of remorse” and empathy for Zhang’s family, also saying her parents “may never know where their daughter’s remains rest.”

In secret recordings of Christensen made by his girlfriend for the FBI, he sounded confident he successfully disposed of Zhang’s body, saying without offering details: “She’s never going to be found. … She’s gone forever.”

With his background in science, he would have been more capable than most of destroying remains.

Evidence at his trial included a scientific article Christensen downloaded before the killing called “Beyond the Grave — Understanding Human Decomposition.” It provides detailed explanations of how bacteria, moisture and other factors can speed up decomposition.

A lack of a body didn’t pose a major obstacle for prosecutors at the trial  because they had blood and DNA evidence from Christensen’s apartment corroborating Zhang was killed in his apartment. /jpv

Read Next
Black lawmaker: White man said ‘Go back where you came from’
EDITORS' PICK
12.2M Filipino families felt ‘poor’ in Q2 of 2022 — SWS survey
ANALYSIS: SBP’s problem is way bigger than its coach
Summit breakthrough – EJ Obiena is the first Filipino to win in the World Athletics Championship
As Duterte stepped down, more Filipinos tighten belts to make ends meet
DepEd seeks P16B addt’l funds for repair of schools damaged by Abra earthquake, typhoons
House energy committee chair Arroyo bats for cheap electricity
MOST READ
Vhong Navarro defended by ex-wife Bianca Lapus amid rape charges order: ‘Standing by this good man’
Giselle Sanchez slammed by Floy Quintos: ‘Art has nothing to do with your choice’
Vice Ganda apologizes for ‘Miss Q and A’ contestant who made inappropriate joke on ‘It’s Showtime’
ANALYSIS: SBP’s problem is way bigger than its coach
Don't miss out on the latest news and information.