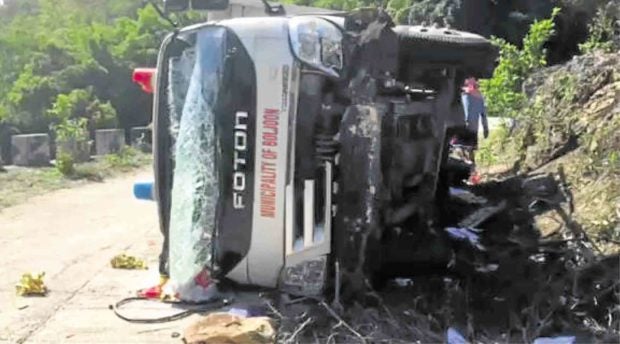 ROADSIDE TRAGEDY A trip to a school festival ends in tragedy in Barangay Upper Becerril, Boljoon town, in Cebu on Friday. —CONTRIBUTED PHOTO

CEBU CITY—Nine people, seven of them children age between 10 and 12, were confirmed dead after the truck taking them to a school activity lost control and fell on its side on a cliffside road in Boljoon town, south of Cebu province, on Friday.

Boljoon municipal information officer Ruben Niere said the truck passengers, who were on their way to participate in a parade for a sports and cultural festival in Barangay Poblacion, were mostly pupils from Nangka Elementary School and San Antonio Elementary School in the town’s mountain villages.

They were accompanied by several parents and guardians, two of whom were later counted among the fatalities.

Reports reaching authorities said the truck was approaching a downhill slope when its brakes failed. Veering off the road as it lost control, the truck fell on its side, pinning down some of the victims. Others were thrown out of the vehicle by the impact.

The truck driver, Danilo Mendez Nierre, also of Boljoon, was placed under arrest for reckless imprudence resulting in multiple homicide and physical injuries, as well as damage to property.

Cebu Gov. Gwendolyn Garcia said the provincial government would shoulder the hospitalization of the injured as well as the burial expenses of the families who lost loved ones in the accident, which she called “a tragedy.”

Some of the injured were brought to Vicente Sotto Memorial Medical Center and others to Chong Hua Hospital.

In a radio interview, Boljoon Mayor Merlu Derama said the teachers requested the use of the municipal government’s mini-dump truck to transport the students to Friday’s event.

The mayor said it was the usual recourse for public school teachers in the town since there was no other vehicle available for them. The truck was supposedly intended for disaster and emergency response. —REPORTS FROM IRENE R. SINO CRUZ, DALE ISRAEL, DELTA DERYCKA C. LETIGIO, NESTLE L. SEMILLA, BENJIE TALISIC AND AP