Filipinos have ‘poor’ trust for China, ‘excellent’ for US — SWS survey 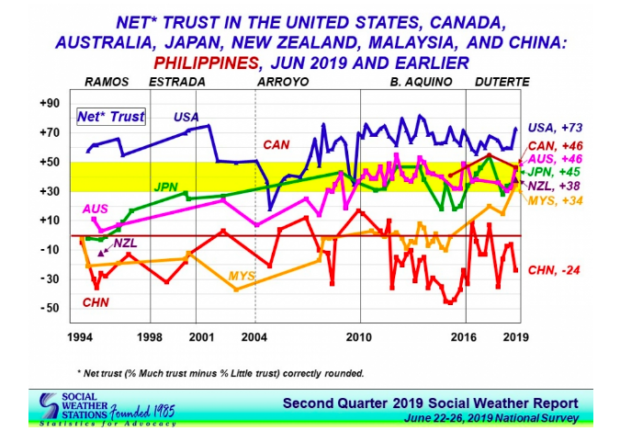 From -6 percent or “neutral” rating in March, Filipinos’ trust rating for China further dropped to -24 percent in June.

It can be noted that the  survey  was done barely  two weeks after the June 9 incident in Recto Bank in the West Philippine Sea  where a Chinese vessel reportedly hit a Filipino fishing boat, leaving 22 fishermen afloat in the open sea.

Meanwhile, Filipinos gave the US a +73 percent trust rating in the latest survey, an increase from +60 percent net rating during the previous survey.

Meanwhile, 81 percent of Filipinos have “much trust” in the US, while eight percent have “little trust.” Eleven percent remained undecided.

Other countries have ‘good’ ratings

Aside from China and the US, the recent SWS survey also showed how Filipinos trusted other countries such as Canada, Australia, Japan, New Zealand and Malaysia.

According to the SWS, Australia and Japan maintained their “good” net trust rating among Filipinos.

Australia earned a +46 percent rating, while Japan’s rating was at +45 percent.

Filipinos’ trust rating in New Zealand and Malaysia both rose to “good” from “poor” and “moderate,” respectively.

New Zealand’s rating was at +38 percent, and Malaysia received a +34 rating for Malaysia.

However, Filipinos’ trust for Canada was now considered “good” from “very good,” as the net trust dipped from +55 percent to +46 percent. The survey,  which used face-to-face interviews of 1,200 adult, had a margin of error of  ±3 percent.

The respondents for the survey were asked this question:

(Let’s now talk about some countries. For the following, please indicate if your trust/faith in (country) is Very much, Somewhat much, Undecided if much or little, Somewhat little, Very little, or You have not heard or read anything about the (country) ever? You may indicate your answers by placing each card on the appropriate box on this rating board.)