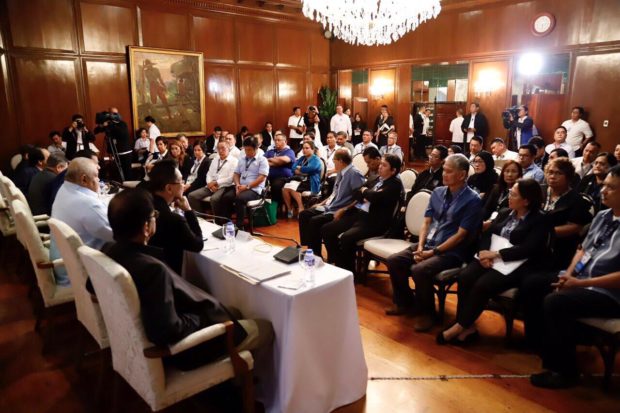 President Rodrigo Duterte meets the relieved employees of the Bureau of Customs in Malacañang on Thursday night, July 18, 2019. The personnel were relieved due to corruption allegations. Photo from Sen. Bong Go

MANILA, Philippines – Malacañang will file corruption charges before the Ombudsman against officials of the Bureau of Customs (BOC).

President Duterte summoned more than 50 BOC personnel in Malacañang on Thursday night as presidential spokesperson Salvador Panelo said the President has been “forthright in telling these customs officials and employees that corruption has no place under his watch.”

“Administrative charges over allegations of corrupt practices in office will be filed against them before the Office of the Ombudsman unless they opt to resign, and the prosecutors will ask for their immediate suspension,” Panelo said in a statement Friday.

Panelo said Duterte told “them that consistent with due process, they will be given their day in court.”

“[Duterte] assured them that he would not begrudge them if they would avail of legal remedies to question their removal from office,” he added.

The President, he said, “thanked them for accepting his invitation to meet him in Malacañang, which according to him, showed they still have respect for him.”

“Pending the filing of cases, they shall be in floating status without authority to act on official matters,” Panelo said.

“Let this serve as a reminder to all those officials or employees in the government that they cannot escape liability or accountability for their acts of corruption under the Duterte administration,” he added.