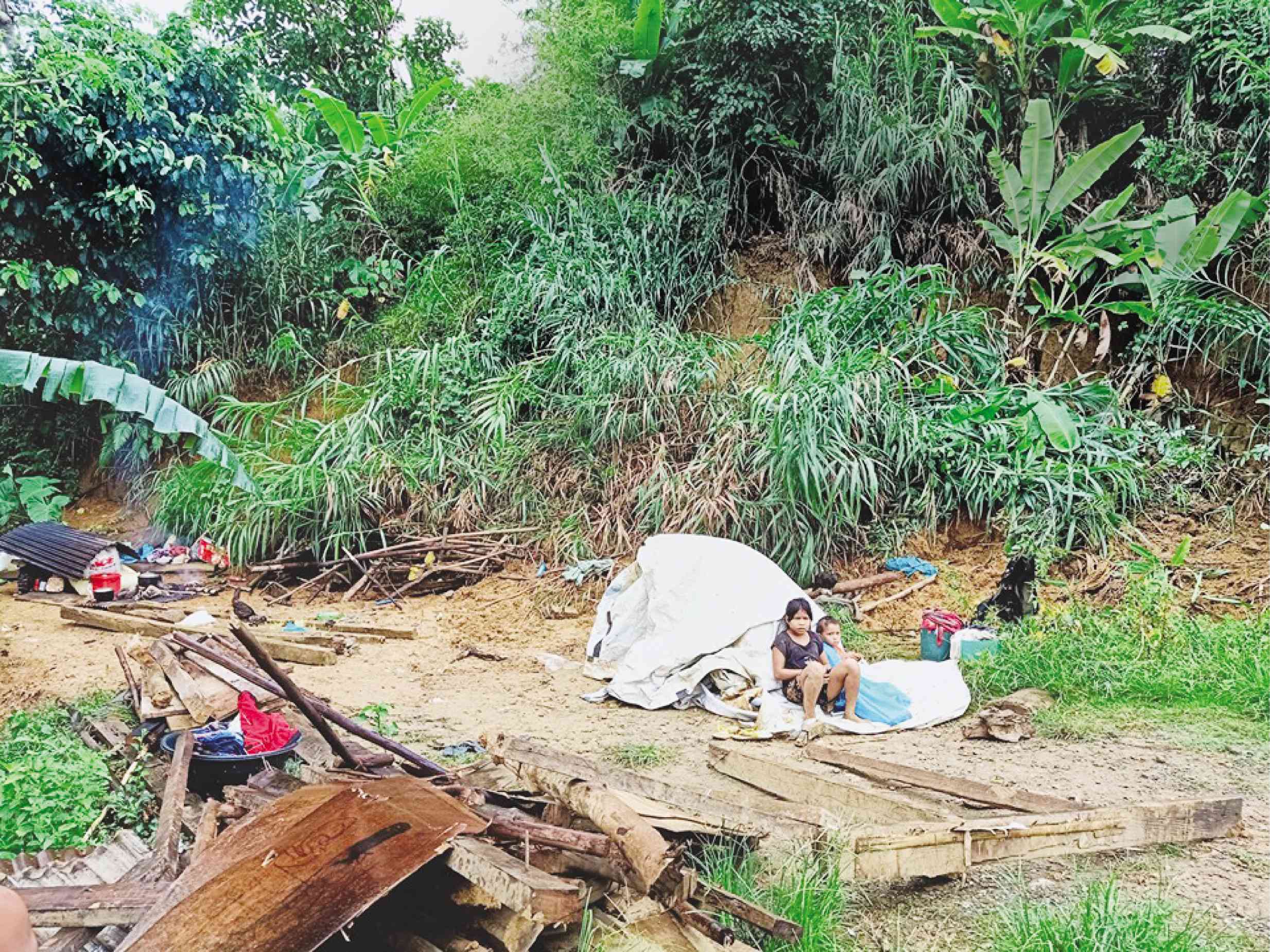 RENDERED HOMELESS Two children spend Thursday in the open after a landslide triggered by heavy rains generated by Tropical Storm “Falcon” damaged their house at BarangayMataguisi in Pudtol, Apayao province, on Wednesday. Falcon blew out of the country on Thursday, but low pressure off Sinait in Ilocos Sur province could develop into a tropical depression this weekend. —PUDTOL MUNICIPAL OFFICE

Tropical Storm “Falcon” (international name: Danas) gained strength as it blew out of the country on Thursday, leaving four people dead in two provinces in northern and central Luzon.

As of 4 p.m. on Thursday, Falcon was centered 655 kilometers north-northeast of Basco, Batanes province, out of the Philippine area of responsibility earlier than had been expected.

Falcon gained a bit of strength and speed as it moved northward at midday.

From 20 kilometers per hour earlier, it exited the country faster at 25 kph, carrying maximum winds of 80 kph from an earlier 75 kph, and gusts of up to 100 kph, stronger than 90 kph earlier.

Falcon’s departure, however, won’t bring clear skies on Friday, according to the Philippine Atmospheric, Geophysical and Astronomical Services Administration (Pagasa).

Pagasa said monsoon rains would persist in the Ilocos region, Cordillera Administrative Region and the provinces of Bataan and Zambales on Friday.

In Metro Manila and the rest of Luzon, cloudy skies and scattered rain showers would make the day bleak, according to the weather service.

Thunderstorms may bring isolated rain showers in the Visayas and Mindanao, it said.

But clear weather may be expected during the weekend, it added.

Pagasa, however, is monitoring low pressure that may develop into a tropical depression during the weekend.

As of 3 p.m. on Thursday, the low-pressure zone was 310 km west-northwest of Sinait, Ilocos Sur province, still outside the Philippine area of responsibility.

Once it becomes a tropical cyclone, it will be named “Goring.”

Falcon touched down in Gattaran town, Cagayan, at 12:30 a.m. on Wednesday, drenching swaths of the far north, swelling waterways and flooding communities as far as Central Luzon and Metro Manila.

Judith Berbano, 43, a farmer, drowned after being swept away by strong current while gathering driftwood on a swollen river in Abulug town, said Rogelio Sending Jr., acting provincial information officer.

In Zambales province, two college students drowned while swimming off a beach in Iba town as Falcon befouled the weather on Tuesday.

The bodies of Marisol Yeke, 21, and Alison Testimio, 20, were recovered from waters off Barangay Lipay-Dingin in Iba, police said.

In Apayao province, people living near a river in Pudtol town were ordered to move to safer grounds when part of the riverbank near their homes eroded under heavy rains on Tuesday.

In Pampanga province, 15 villages in the coastal town of Masantol went under water a meter deep, according to the provincial disaster office.

School was called off in the towns of Floridablanca, Guagua, Macabebe, Masantol and Sasmuan, and in Mabalacat City.

Intermittent rains dumped by Falcon damaged houses and forced their occupants to shelters in Mindoro.

As of Thursday, 15 families, or 54 people, remained in an evacuation center at Bongabong town in Oriental Mindoro province, the regional disaster office said.

Floodwaters rose on Wednesday, damaging 15 houses made of light materials in Barangay Camantigue.

Four families, or 20 people, were evacuated. They were allowed to return to their houses on Thursday.

Classes resumed at schools in Camarines Sur and Albay provinces in Bicol as the weather improved on Thursday.

Read Next
Illinois man gets life in prison for killing Chinese scholar
EDITORS' PICK
Two more sites at Robinsons Malls for temporary offsite passport services
DOH checking if 3 COVID cases due to Omicron
Corruption in PH: Where presidential aspirants stand
Gov’t fine-tunes alert level system
Smart offers wireless fiber-like speeds to Filipino homes with country’s first 5G Prepaid Home WiFi
Holidays made best with Acer’s ‘Holidays at Home’ raffle promo
MOST READ
Isko’s messaging takes a turn as he commends Duterte
Pharmally’s Twinkle Dargani in tears when asked about missing documents
DOH checking if 3 COVID cases due to Omicron
Gordon to Duterte: ‘How dare you ask for Filipinos’ vote when you failed them?’
Don't miss out on the latest news and information.