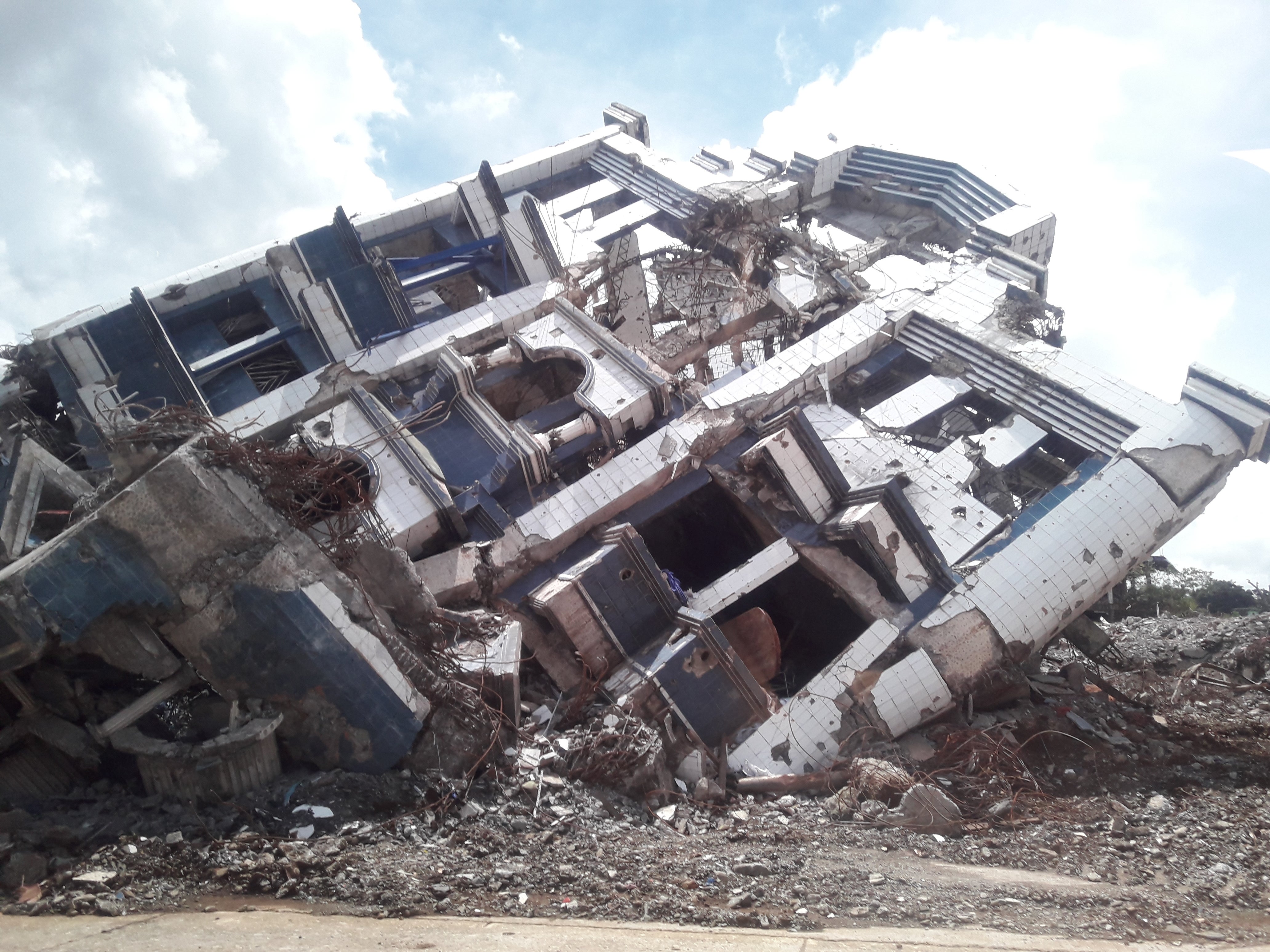 MOUNDS OF RUBBLE Nearly two years after President Duterte declared the war in Marawi over,mounds of rubble
from destroyed buildings stand as stark reminders that no significant reconstruction work has taken place in the center of the Islamic city and more than 66,000 of its residents remain homeless, according to a UN body. —DIVINA M. SUSON

MARAWI CITY—Almost two years after government troops wrested this city from terrorists aligned with the Islamic State, the survivors of the five-month war have yet to gain the foothold necessary to start all over again.

Buildings, including mosques, flattened by bombs or pockmarked with bullet holes serve as grim reminders of the government’s glacial response to the tragedy that uprooted over 350,000 people and killed some 1,100 others. The dead, according to the military, were mostly Islamic militants—a claim that has yet to be independently verified.

President Duterte raised the Marawi folk’s urgent need for assistance during his State of the Nation Address (Sona) on July 24, 2017, while the siege that began on May 23 was still raging.

In October of that year, the Philippines’ first president from Mindanao announced the liberation of Marawi from the hands of the Maute and Abu Sayyaf groups and the start of the rehabilitation process.

But almost two years later, no significant reconstruction work has taken place at Ground Zero, leaving over 66,000 persons still homeless, according to data from the United Nations’ Office for the Coordination of Humanitarian Affairs (Ocha)-Philippines.

For the Meranaw, the 250-hectare Ground Zero, now referred to as the most affected area (MAA) in the battle zone, was the city’s heart and soul. Spanning 24 of Marawi’s 96 villages, it hosted much of the city residents’ business establishments and cultural heritage sites.

Of the 66,000 displaced persons listed by Ocha-Philippines, at least 51,750 are home-based “bakwit,” or evacuees staying with their relatives. As many as 3,500 internally displaced persons (IDPs) continue to languish in “tent cities,” and 10,800 others are staying in transitional shelters.

Those staying in tent cities yearn to return to their ruined homes, or to be moved to decent transitional sites. Not one evacuee has been settled in the permanent shelters, which are still in varying stages of construction.

At the Sarimanok Tent City Site 1, the family of Aisha Calalagan and more than 100 others complained of lack of food as well as water for drinking and for household use.

A number of toilets had been padlocked and were reeking because of overflowing septic tanks, Calalagan said.

“I can no longer count how many times the government promised to transfer us to transitional shelters,” she said. “For the third time this year, we observed Ramadan as IDPs. Life is harsh in this tent city.”

Imam Omar Sarip said the evacuees had been fervently praying to be moved elsewhere, or, better yet, to be allowed to return to Ground Zero so they could finally start rebuilding their broken lives.

Sarip is among the almost 16,000 homeowners from Ground Zero subjected to Kathanor (organization) profiling by Task Force Bangon Marawi (TFBM) and found eligible to receive a livelihood settlement grant and transitory family support package of P73,000 from the government.

He used part of the money to buy a motorcycle that he turned into a tricycle with a sidecar provided by a nongovernment organization. “We are barely surviving due to lack of regular income,” Sarip said, noting the dwindling assistance from both the government and NGOs.

Last year, the government shifted its assistance to the evacuees from humanitarian emergency response operations to the early recovery and rehabilitation phase.

But Drieza Lininding, chair of the Marawi-based Moro Consensus Group, said: “Ironically, two years after the siege, the realities on the ground show that [the city] is still in the humanitarian response phase and not yet into the early recovery and rehabilitation stage.”

He cited the continued profiling of the residents, the presence of IDPs in tent cities and transitional shelters, and the lack of reconstruction work at Ground Zero.

In a shocking announcement on April 23, Mr. Duterte said the government would “no longer spend for the repair or reconstruction of destroyed buildings inside the MAA and just leave the rich Meranaw businessmen and illegal ‘shabu’ dealers to shoulder the expenses.”

Said Lininding: “If the government will not support the rehabilitation of private houses, it might as well let us come home. It is sad because the city residents had hoped that their houses would be rebuilt [by the government].”

According to Lininding, the displaced people of the city will hold a “State of the Marawi ‘bakwit’ Address” simultaneous with Mr. Duterte’s fourth Sona on July 22 to inform the public of the “real score” in the rehabilitation efforts and to demand accountability from the government.

The TFBM chair, Secretary Eduardo del Rosario, has appealed to the evacuees for understanding, saying that the recovery of unexploded ordnances (UXOs) had been hampering the start of reconstruction in the MAA.

“[We are conducting the rehabilitation] slowly but surely to ensure the safety of the residents,” he said at a press briefing in the MAA in April.

Of the 70 powerful bombs fired from military aircraft during the siege that did not explode, only 21 have been recovered and detonated. The rest of the unexploded bombs, which range from 100 to 500 pounds, are still lying somewhere in the MAA.

But since last year, the military has ceased to take part in the search for the UXOs. The task has been taken over by the private contractor in charge of clearing the debris, said Brig. Gen. Romeo Brawner Jr., commander of the 103rd Infantry Brigade.

The military has taken flak for the evacuees’ delayed return to their homes, as well as the delayed reconstruction work because of the snail-paced search for the unexploded bombs. Brawner cited safety as the main reason the TFBM had restricted residents from the MAA.

“The 21 UXOs the military safely recovered and detonated were found using manual methods with the help of the coordinates provided by the Philippine Air Force,” Brawner told the Inquirer. “When we were instructed to stop searching for the remaining UXOs, we turned over the record of the coordinates to the private contractor.”

Asked how many UXOs were left, Assistant Secretary Felix Castro Jr., the TFBM field office manager in Marawi, said the National Housing Authority (NHA) had yet to provide updates.

The NHA, which is in charge of debris clearing and demolition, awarded the P2.2-billion debris management contract to Eddmari Construction and Trading.

Minus that recently detonated explosive, 48 UXOs have yet to be recovered and detonated by Eddmari bomb experts, as reckoned from TFBM data as of April.

But Castro said the target date for the gradual return of the evacuees to the MAA remained the same, as announced by Del Rosario.

Residents of Sector 1 (Barangays Tolali and Daguduban) may start the repair of their houses “this July”—but first, they would have to secure a permit from City Hall, he said.

Sector 1 is considered a less affected area (LAA) of the MAA, along with Sectors 2 and 3, whose residents are scheduled to return by August.

Del Rosario earlier announced that the UXO clearing would be completed “by Aug. 30 so that the MAA residents can return starting in September up to November.”

A portion of Ground Zero has since been opened to traffic.

Del Rosario said the reconstruction and rehabilitation of Marawi “can be completed by December 2021,” or half a year before the Duterte administration ends.

Marawi Mayor Majul Gandamra was earlier quoted as saying that the residents were frustrated by the delayed rehabilitation and reconstruction of their city.

Lanao del Sur Assemblyman Zia Alonto Adiong, a member of the Bangsamoro Transition Authority (BTA), said the evacuees were getting impatient with the way things were going. But he said the TFBM was doing its best to hasten the process.

“Overall, I see no sense of negligence on the part of the government. It is just that the degree of devastation was so huge,” he said.