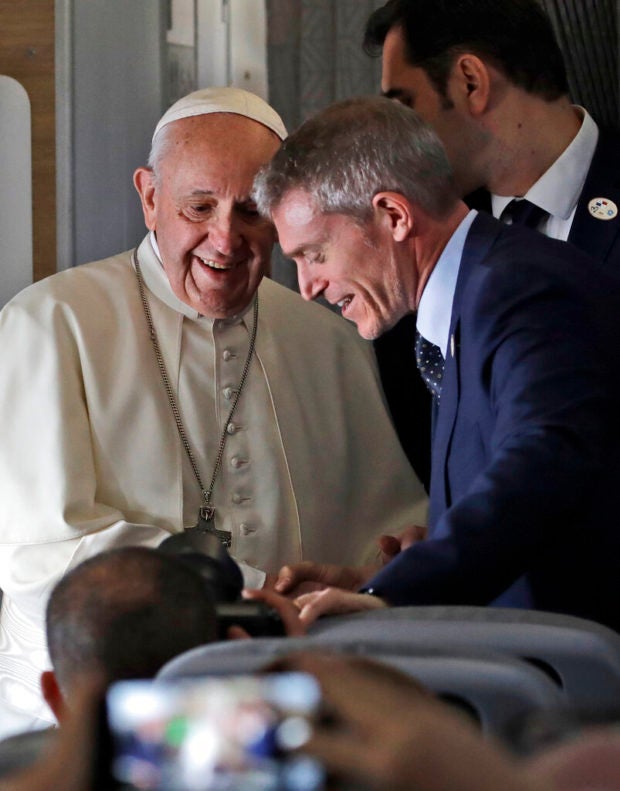 In this Wednesday, Jan. 23, 2019 Matteo Bruni, official of the Vatican press office, shakes hands with Pope Francis on board the papal flight to Panama from Rome. Pope Francis named a new Vatican spokesman Thursday, July 18, 2019, tapping Matteo Bruni, the British-born official who has handled media logistics for papal trips, in the latest shakeup of the Vatican’s communications operations. AP

Gisotti had always said his term would be temporary given the demanding nature of the job and his obligations to his young family. The Vatican said Thursday he will now join the communications ministry as a deputy editorial director.

Bruni’s appointment marks the latest change in the Holy See’s communications operations under Francis. Previous reforms have included the creation of an overall ministry with institutional editorial oversight, the slimming down of the Vatican Radio operation, and new leadership of the spokesman’s office, the Vatican newspaper L’Osservatore Romano, and its women’s magazine.

Bruni, 42, joined the Vatican press office in 2009, coordinating accreditations. In 2013 he took over organizing the logistics for media during papal trips, negotiating access with host countries ahead of time and shepherding journalists from venue to venue during the trips themselves. Born in Winchester, England, he was educated in Italy and speaks English and Italian fluently, as well as Spanish and French.

In a statement announcing the new changes, the Vatican’s communications director, Paolo Ruffini, said Bruni would be joined by a deputy director of the press office, who hasn’t been named.

Bruni, who has not previously worked as a journalist, told the Vatican’s in-house media operation, Vatican News, that the world needs communications that are “official, clear, transparent about events and contribute to understanding the complexity of the world in which we live.” /kga