HONOLULU — Thousands of protesters have joined a swelling effort to stop construction of a telescope they have long tried to keep off a mountain considered sacred to some Native Hawaiians, but state officials doubled down Wednesday on their commitment to ensure the project will be completed. 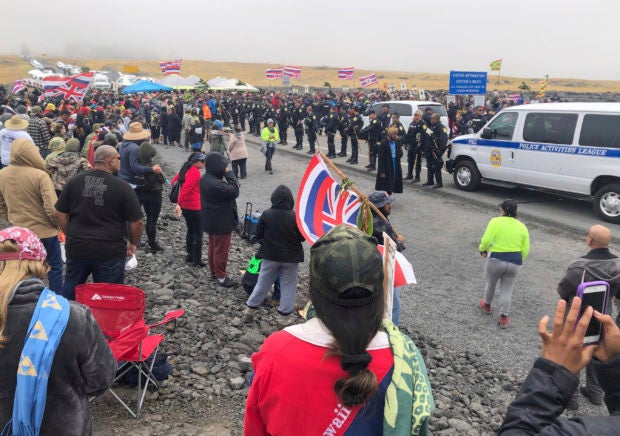 Police in riot gear are lined up on a road in Hawaii where an estimated 2,000 people are gathered to protest construction of a telescope on a mountain that some Native Hawaiians consider sacred, on Mauna Kea on the Big Island of Hawaii, Wednesday, July 17, 2019. Hawaii County Managing Director Wil Okabe says officials on Wednesday closed a highway leading to the protest site so a convoy of construction equipment can be brought up Mauna Kea. Protesters are off to the side of the road, singing. (Cindy Ellen Russell/Honolulu Star-Advertiser via AP)

The state hadn’t decided whether to remove protesters from the mountain, but the proclamation makes that an option, Ige said.

“We are certainly committed to ensuring the project has access to the construction site,” Ige said. “We’ve been patient in trying to allow the protesters to express their feelings about the project.”

About 2,000 people packed the base of Mauna Kea after the arrests, Hawaii County Managing Director Wil Okabe said. That’s more than three times the number of protesters who had showed up in previous days.

Police in riot gear temporarily lined the road to the top of the Big Island mountain, which is valued by astronomers for its consistently clear weather and minimal light pollution and the site for the $1.4 billion Thirty Meter Telescope, expected to be one of the world’s most advanced.

Protest leader Kealoha Pisciotta told The Associated Press that police took away about 30 elders who were prepared to be arrested as they blocked the road. 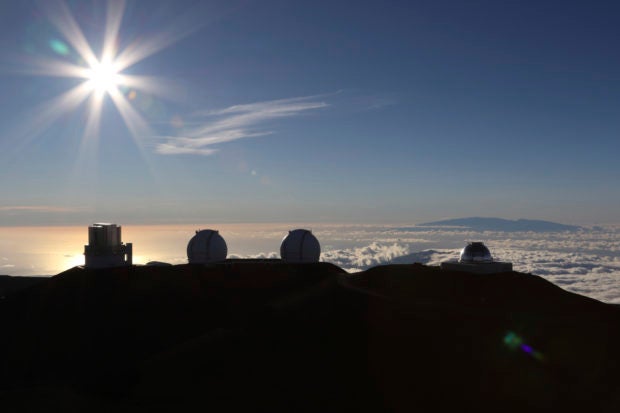 The sun sets behind telescopes at the summit of Mauna Kea, Hawaii’s tallest mountain, Sunday, July 14, 2019. Hundreds of demonstrators gathered at the base of Hawaii’s tallest mountain to protest the construction of a giant telescope on land that some Native Hawaiians consider sacred. State and local officials will try to close the road to the summit of Mauna Kea Monday morning to allow trucks carrying construction equipment to make their way to the top. Officials say anyone breaking the law will be prosecuted. Protestors have blocked the roadway during previous attempts to begin construction and have been arrested. (AP Photo/Caleb Jones)

Some of the elders being arrested used canes and strollers to walk, while others were taken in wheelchairs to police vans. Those who could walk on their own were led away with their hands in zip ties.

Walter Ritte, one of the protesters arrested, said he was driven down the mountain and later went back to the base of Mauna Kea but didn’t plan to block the road again Wednesday.

“But tomorrow is another day, and we’re free to do whatever we want tomorrow,” Ritte said.

Native Hawaiian protesters and other opponents of the Thirty Meter Telescope say they are concerned that construction will desecrate and damage the mountain.

The project has been delayed by years of legal battles and demonstrations. Last year, the Hawaii Supreme Court ruled that telescope officials had legally obtained a permit, clearing the way for construction to begin.

But protesters are still fighting at the mountain and in court, filing a lawsuit last week that said the project must post a security bond equivalent to the construction contract cost before starting to build.

Telescope officials said the challenge has no merit and is another delay tactic.

Some Native Hawaiians say they don’t believe the project will desecrate Mauna Kea. Most of the cultural practices on the mountain take place away from the summit, said Annette Reyes, a Native Hawaiian from the Big Island.

Authorities closed the road to the mountain Monday to allow construction to begin, attracting hundreds of protesters who formed their own roadblocks.

The blockade forced astronomers to stop operating 13 existing telescopes on the mountain Tuesday. Dozens of researchers from around the globe won’t be able to gather data and study the sky.

Observations won’t resume until staffers have consistent access to the summit, a move that is needed to ensure their safety, said Jessica Dempsey, deputy director of the East Asian Observatory, one of the existing telescopes.

“Our science time is precious, but in this case, our priority is just to make sure all of our staff is safe,” Dempsey said. /gsg