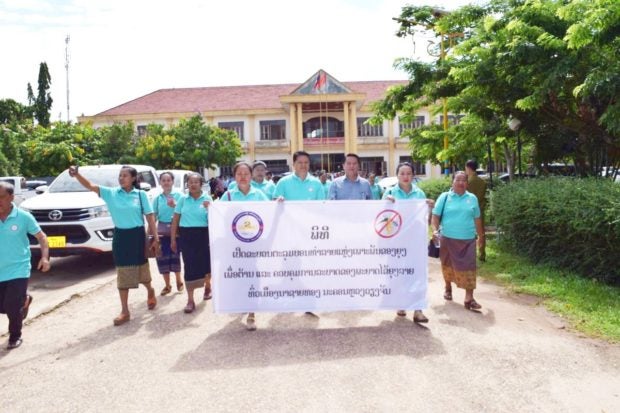 VIENTIANE — Laos is facing an outbreak of the most virulent form of the dengue virus this rainy season.

The National Centre for Laboratory and Epidemiology has determined that dengue virus serotypes 2 and 4 have been the causative organisms of the more than 14,000 cases of dengue fever recorded, which have resulted in 31 deaths so far.

In particular, serotype 2 causes hemorrhagic fever, which has a high mortality rate. An analysis of the type 2 strain has shown that the virus has mutated. Minister of Health, Associate Prof. Dr Bounkong Syhavong, said Vientiane is experiencing an outbreak of the type 2 dengue virus which is the most toxic type. Champassak, Savannakhet and other southern provinces have also recorded cases involving type 2 of the virus.

“At this time of the year, if people fall ill, they should suspect that dengue is the cause of their illness and get a blood test at a hospital,” he said.

“People infected with the type 2 virus can become dangerously ill within two days instead of four or five days as is the case with other serotypes, as we have found out previously.”

“Based on the serotype data available, the Ministry of Health has been advising everyone to take steps to keep dengue at bay since January. All provinces have set up special task forces to combat dengue,” the health minister said.

The dengue virus is spread by the bite of an infected Aedes mosquito and causes a wide spectrum of conditions from mild asymptomatic illness to severe fatal dengue hemorrhagic fever/dengue shock syndrome.

The World Health Organisation (WHO) estimates that about 2.5 billion people live in dengue risk groups with about 100 million new cases each year worldwide.

There has been a huge increase in the number of dengue cases recorded in Laos this year.  Last year 6,446 cases and 19 deaths were recorded, but as of July 16 this year 14,242 cases and 31 fatalities have been reported.

Six deaths occurred in Vientiane, 10 in Savannakhet, five in Champassak, one in Attapeu, three in Saravan, three in Khammuan, two in Borikhamxay, and one in Xayaboury.

Assoc. Prof. Dr Bounkong said the Ministry of Health is encouraging the public to make sure that all stagnant water is removed, in order to prevent dengue-carrying mosquitoes from breeding.  The ministry is also stressing the need for correct diagnoses to be made and effective treatment to be administered.

According to the WHO, climate change and global warming will increase vector-borne diseases like dengue.

A report on climate change and health published by WHO says that in the last 100 years the world has warmed by about 0.75 degrees Celsius. Over the last 25 years, the rate of global warming has accelerated, at over 0.18 degrees Celsius per decade.

Dengue has become the most rapidly spreading mosquito-borne viral disease in the world. It is estimated to cause more than 50 million infections and around 15,000 deaths every year across more than 100 countries. Infection can range from a mild flu-like fever to the potentially fatal severe form of dengue, which particularly affects individuals who are exposed to one of the four different strains of the virus as a secondary infection.