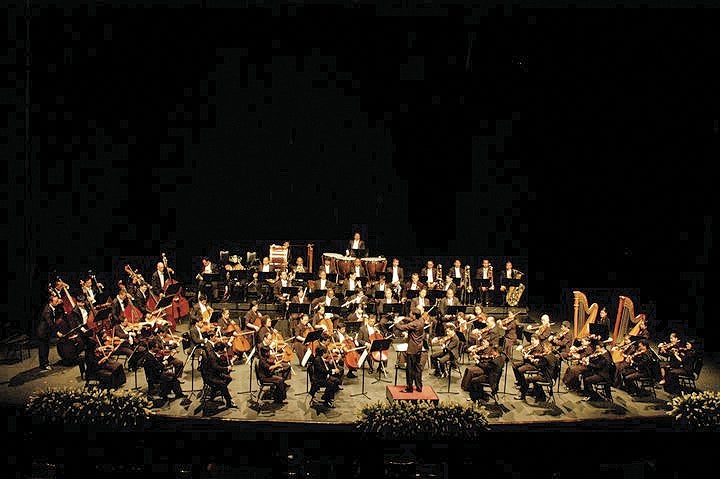 SONA SYMPHONY The Philippine Philharmonic Orchestra, shown here in a 2013 concert, will serenade lawmakers and guest dignitaries at the House of Representatives while they await President Duterte’s fourth State of the Nation Address on July 22.

MANILA, Philippines — For the first time, an orchestra will perform live for a State of the Nation Address (Sona) at the House of Representatives, a novel feature of President Rodrigo Duterte’s annual report this year on where the country stands since he took office in 2016 and where he plans to take it next.

The Philippine Philharmonic Orchestra (PPO), the country’s leading musical ensemble and one of the most renowned in the Asia-Pacific region, will perform classic Filipino compositions to serenade officials and foreign dignitaries before the President addresses a joint session of the Senate and the House at 4 p.m. on Monday.

“Compared to the previous Sonas, the public will be in for a surprise as they will be greeted by the Philharmonic. This is an added [feature] where art is given significance, because we need that,” Arsenio Lizaso, Cultural Center of the Philippines president, said on Wednesday.

About 65 PPO members will play Filipino classics to welcome the President and his entourage and other guests, and the national anthem in the formal opening of the 18th Congress.

Lizaso said the performance was in keeping with the wishes of filmmaker Joyce Bernal to make this year’s Sona different. Bernal is directing the event for the second time.

Bernal earlier said she hoped this year’s event would usher in  a “more celebratory atmosphere,” not a repeat of the tense and suspenseful drama that unfolded last year and ended in the ouster of then Speaker Pantaleon Alvarez.

“We want to have  fresh perspectives. We want it grand, like having beautiful music played live. This is just a dream, and it can happen if we have the budget for it and through sponsorships,” Bernal said.

Her dream came true as the PPO will perform for free.

As music welcomes the Sona guests, a sea of blue will cover a portion of Commonwealth Avenue in Quezon City close to the legislative building, as demonstrators plan to dramatize their stand against the President’s policy in the West Philippine Sea.

Renato Reyes, secretary general of Bagong Alyansang Makabayan, one of the rally organizers, said thousands of people wearing blue and carrying fishing gear would join the protest against the President’s stance in the country’s maritime dispute with China.

On Wednesday, rally organizers and Maj. Gen. Guillermo Eleazar, director of the National Capital Region Police Office, and his officers met to ensure that the protest would be peaceful.

Reyes said the protesters would no longer march on the House, citing the narrow road to it. They will instead hold a program in front of  St. Peter’s Church, also on Commonwealth.

Eleazar said police expected more than 15,000 demonstrators but did not give an estimate of the number of pro-Duterte demonstrators.

“In the Sona of the ordinary people, we will [tackle] human rights, the West Philippine Sea and defend our sovereign rights,” Reyes told reporters as he and Eleazar inspected the rally site.

Reyes said it would be the first time that the Sona protests would focus on the President’s policies on the West Philippine Sea, waters within the country’s 370-kilometer exclusive economic zone (EEZ) in the South China Sea.

Critics say the President often showed aggression toward Western countries, recently threatening to declare war on Canada over Canadian waste shipped to the Philippines, but spoke softly about Chinese incursions on the West Philippine Sea.

The President came under fire last month for playing down the sinking of a Filipino fishing boat near Recto Bank by a Chinese trawler, which abandoned 22 Filipino crew members before they were rescued. He described the incident as a small maritime accident.

When he disclosed that he had a “verbal agreement” with China’s President Xi Jinping to allow the Chinese to fish inside the Philippine EEZ, critics raised a howl of protest, saying he went against the Constitution, which gives Filipinos exclusive rights to resources in that maritime zone.

Lawmakers belonging to progressive party lists said they would display their symbolic protest against the Duterte administration’s pro-China position.

“These past days, it yielded up our sovereign rights in Recto Bank. Tomorrow, it will give up everything, wholesale our national patrimony to these same powers and their local minions via the worst ever Charter change,” said Bayan Muna Rep. Carlos Isagani Zarate.

Zarate said he would be wearing a hand-painted barong tagalog depicting a call on the government to assert Philippine sovereignty, and defend Filipino fishermen and the environment.

It will show a man on a Chinese vessel appearing to cast his fishing rod toward the Philippine flag to snatch one of its three stars.

The message on Bayan Muna Rep. Ferdinand Gaite’s barong will be a call for a P750 national minimum wage and an end to the end of contract (endo) labor scheme.

The Sona has become a fashion show of sorts where many members of Congress walk literally on the red carpet, with some female representatives arriving in fancy gowns and sparkling jewelry.

Some lawmakers use the occasion to give credit to local fashion designers or promote ethnic fabrics.