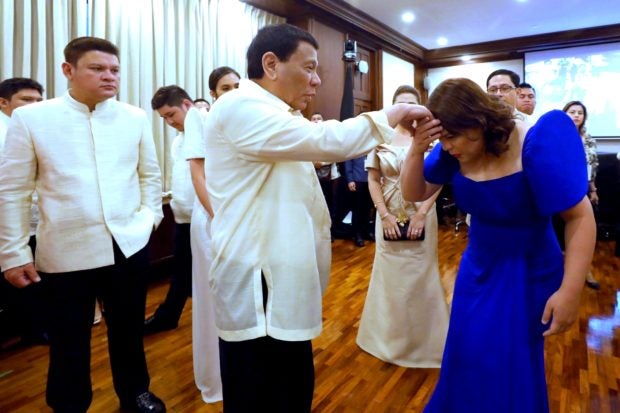 President Rodrigo Roa Duterte extends his hand to his daughter Davao City Mayor Sara Duterte-Carpio, who showed a gesture of respect to her father after delivering his third State of the Nation Address (SONA) at the Session Hall of the House of Representatives Complex in Constitution Hills, Quezon City on July 23, 2018. Also in the photo is the President’s son Paolo Duterte. TOTO LOZANO/PRESIDENTIAL PHOTO

In a text message to INQUIRER.net Wednesday evening, the presidential daughter said she is currently on “special medical leave for 60 days.”

Duterte’s 2018 Sona was delayed for over an hour after House members moved to unseat Davao del Norte 1st District Rep. Pantaleon Alvarez as Speaker and subsequently replace him with former President and then Pampanga Rep. Gloria Macapagal-Arroyo, a scheme reportedly hatched by the Davao City Mayor. /kga