P3.2-M ‘hot’ logs seized from Chinese man, 4 others in Bulacan 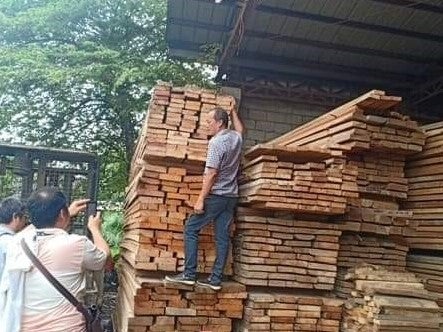 CITY OF MALOLOS — A Chinese national and four others were arrested Tuesday in Guiguinto town, Bulacan province after they were caught with P3. 2 million worth of illegally-cut lumber from the Sierra Madre Mountain ranges.

Rolly Mulato, head of Department of Environment and Natural Resources (DENR) Community Office in Guiguinto town, said about 56,000 board feet of premium hardwood species of Narra, Kamagong, Tindalo, Tanguile, Yakal, Mayapis, and Benguet pines were seized at the warehouse of Ricky Yu in the boundary of Barangay Tabe.

Yu and his Filipino cohorts, identified as Andy Binos, Robert Bonaobra, Ernesto Vasquez Jr., and Jerry Belgica, have been charged for violation of forestry laws.

According to Mulato, the arrest of the suspects and the confiscation of the lumbers came after DENR and the National Bureau of Investigation teams conducted surveillance operations on the group’s activities.

Authorities confirmed through their surveillance that pieces of lumber were transported in a closed van from the Sierra Madre mountain range.