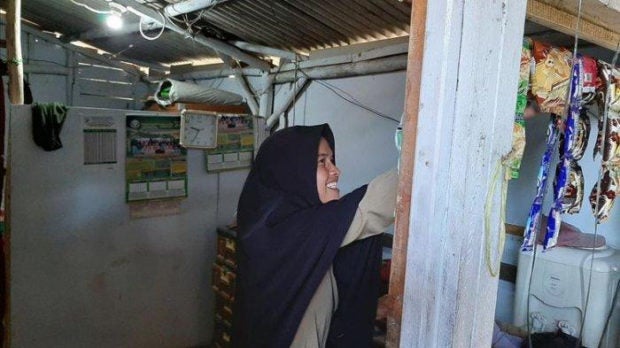 Nining Suryani, 44, a contract-based teacher in SD Karyabuana 3 state elementary school, shows off her ‘house’, which uses the school’s toilet building and has been modified to accommodate her family. kompas.com via bogor.tribunnews.com/Acep Nazmudin via The Jakarta Post/Asia News Network

JAKARTA — Forty-four-year-old Nining Suryani and her husband, Ebi Suhaebi, 50, have been living in the toilet building of the school in which Nining works as a contract teacher in Cigeulis district in Pandeglang, Banten.

Nining and Ebi have no choice but to use the toilet building at SD Karyabuana 3 state elementary school as a shelter as they have no other place to live. Their own house collapsed two years ago because the wood it was made of became old and weathered.

The toilet building, which is still used by teachers and students every day, has been modified to accommodate their household needs. More walls were built around the toilet, forming a small room in which they sleep and operate a kiosk to sell snacks.

“Some parts of the toilet were turned into a kitchen. We sleep [in a room] next to the toilet. The additional room was built using aid money from the principal,” Nining said on Monday, kompas.com reports.

She went on to explain how the principal at first rejected her request to temporarily stay in the school’s toilet building, but then ended up lending a hand so that Nining and Ebi could have a proper roof above their heads.

“The principal bought us wood. My husband and I built [the additional building]. Thank God, now we can live comfortably,” she said.

With Rp 350,000 (US$25) monthly as a salary as a contract-based teacher and the uncertain income Ebi earns doing odd jobs, renting a house was not a choice for them.

Nining, who has been a contract-based teacher for 15 years, said she wishes that one day she would be promoted to be a permanent teacher and civil servant.

“If I am not promoted, it’s okay, but at least the government has a policy to raise our salary every month. Small or big [raise], I’ll accept that sincerely,” the mother of two said.

One of Nining’s children works in Jakarta, while the other one is attending an Islamic high school 40 kilometers from Cigeulis.

Nining said she once thought of leaving her job. She, however, cancelled her plan when she realized that she still needs a stable job to pay for her second child’s tuition fees.

Responding to Nining’s experience, Cigeulis District Secretary Encep Hadikusuma said that the office is attempting to relocate them to a more decent place.

“We, from the district office and fellow teachers, have reached an agreement to build her a house. We will build it soon,” Encep said.