Tents will serve as makeshift treatment centers for dengue cases in Iloilo province, as government hospitals have run out of space for patients seeking treatment for the illness.

Private rooms, conference halls and hallways in the hospitals have been converted into wards to accommodate them.

Western Visayas, which includes Iloilo, has recorded the highest incidence of dengue among the country’s 17 regions so far, while dengue outbreaks have been declared in its provinces of Antique, Aklan, Capiz and Guimaras.

A total of 13,164 cases were reported in the region from Jan. 1 to June 29, according to the Department of Health (DOH).

As of July 12, 1,863 people, including 851 dengue patients, were confined in the Iloilo provincial hospital and 11 district hospitals, which have a total bed capacity of only 615.

The dengue virus is spread by the Aedes aegypti mosquito, and the disease has no known cure and can be fatal.

The infection triggers a severe flu-like illness, often followed by a severe drop in the patient’s platelet count. 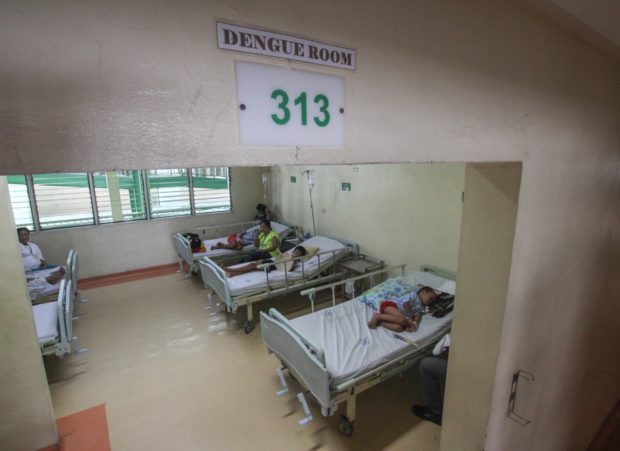 In Negros Occidental, Gov. Eugenio Jose Lacson has declared a dengue heightened alert following the death of 23 people and 3,308 cases reported in the province from Jan. 1 to July 6.

“We need to go back to basic cleanliness to prevent the proliferation of dengue-carrying mosquitoes,” Lacson said.

In Calabarzon (Cavite, Laguna, Batangas, Rizal and Quezon), most cases were recorded in the densely populated Cavite province.

As of Tuesday, the DOH recorded 13,032 confirmed and suspected cases in the region between January and July 15. Of this number, 1,130 cases were confirmed through laboratory tests.

The department noted a “twofold” increase in dengue cases on the island of Jomalig in Quezon province. Twenty-three cases were recorded “in just one day” on July 14, among them a DOH physician.

“We had an emergency [visit] to Jomalig last Sunday. The municipality sprayed the [mosquitoes’] breeding grounds and [conducted] a cleanup [drive] and immediately, the number dropped the following day,” said Dr. Eduardo Janairo, regional health director.

At least 20 people died of dengue in Calabarzon in the first six months of the year.

In Bicol, 25 have died since January—nine in Albay, eight in  Camarines Sur, five in Sorsogon and one each in Masbate, Catanduanes and Camarines, according to the DOH.

Cecil Pan, dengue program coordinator of the DOH regional office, said 2,170 patients were diagnosed with dengue in Bicol between Jan. 1 and July 6.

Dr. Milagros Sunga, Digos health officer, urged parents to destroy mosquito breeding-grounds at home and reminded them to use mosquito nets at night.

Several health workers in Western Visayas said the surge in dengue cases could be partly due to the low immunization rate among schoolchildren following the Dengvaxia controversy.

The Dengvaxia dengue immunization program was piloted in several areas (not in Western Visayas), but the school-based program was suspended amid allegations that the vaccine caused deaths in several of those who received it.

While there has been no confirmed death attributed to the vaccine, many parents and children have refused or avoided immunization services for other diseases offered by government health centers.

“When we approach them for immunization, they ran away or refused because they said they might also die like those administered with Dengvaxia,” said a nurse in a municipal health center.

Those who failed to get vaccinated for other illnesses like measles could become vulnerable because vaccination helps boost the immune system, said Dr. Glen Alonsabe, Western Visayas epidemiologist. —With a report from Michael Jaucian